Sorry there aren't more photos. If you read our story you will see why.

Even though our climb of Mt. Kinabalu was a few days into our trip, I have decided to post about it first of all.

A lot of preparation, research and a good dose of angst (mainly from me) went into our efforts on this climb.

I read every blog entry I could find about those who had already done the climb.

I knew the initial few kilometres comprised of very steep steps into the rock.

I knew it would be very hot and humid so plenty of sunblock was required and shorts would be fine initially.

I knew warmer clothes would be needed higher up as it turns extremely cold.

I knew we had to start off very slowly as we would need that energy reserve later.

I knew to respect the altitude and heed the symptoms of altitude sickness.

I felt I had a fairly good idea of what to expect and most people's experiences seemed to be consistent.

I trained hard at the gym and my fitness was never an issue. (Thanks Vibrobody). Hubster was absolutely fine too, the mountain goat that he is!

The altitude was not a problem, for either of us. (Blessing)

However nowhere did I read the experience we were to encounter. (Nowhere!)

145 other people embarked on the climb with us that day. (Not all at the same time)

When we set off the whole of the mountain was shrouded in thick cloud. No chance of seeing our nemesis before we started. 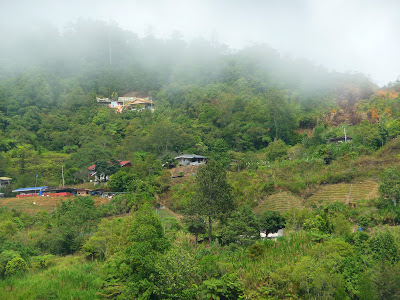 It was dank and drizzling.

After just 1km up, 30 minutes in, it was raining heavily and we were soaked through. Shorts, knickers, bra - the lot. (even Gareth's bra! lol) 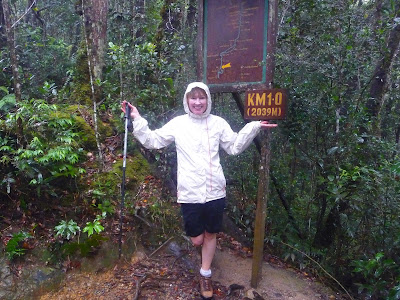 After 4km up, 3.5 hours in, we were battling a downward torrent of muddy rain water and we could clearly hear the wind howling and whistling as we started to emerge out of the tree canopy.

A little weary and in need of sustenance we stopped at the makeshift hut. We nibbled on a few boiled eggs, drank some water and noted Sepison, our guide, was looking concerned. I found the howling wind disconcerting and I was already very cold.

Hubster and I exchanged looks but not words. "Bloody wonderful eh? Not!"

The tips of my fingers were shrivelled like they do when you have been in the bath too long and as I get Reynauds Disease, they were also white, devoid of circulation and I could not feel my grip on my walking poles.

I presented my hands to my Hubster and he immediately clasped my fingers in his cupped hands and blew hot breath onto them. I did windmills with my arms to pump the blood through too. A tried and tested routine, normally performed on a ski slope at about -10.

Sepison, our guide was on his radio.

Forlorn people were strewn around us, visibility was getting poorer and one lady was in floods of tears and screaming in German at her partner.

This was tough. This was not fun at all. 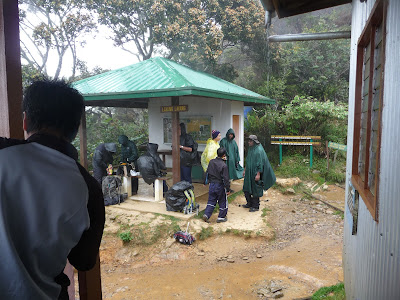 People who had gone up the day before were now passing us on their descent, all muttering how awful it was today and how lovely it was yesterday. (Great!)

Disgruntled I thought "This isn't how it's supposed to be, I never read this scenario, this isn't like rain that I have ever experienced". Indeed it wasn't.

"No good" Sepison said. "Big typhoon, no can summit, too dangerous. No for me" Now these guides do not abort a climb lightly, if they don't take clients to the top, they don't get fully paid and money is hard earned in Borneo. It is an extremely poor country.

We understood every word he said and we knew in our heart of hearts he was right and we know from experience that you NEVER lose respect for the mountain because the mountain will always win but even in our sodden, bedraggled state, disappointment washed over us.

There was no point carrying on. The weather was going to get worse and the slope to the summit would turn into a torrenting waterfall - impossible.

We turned our heels and started the descent down.

It was terrible, so much harder than the climb. The rain water was now so high it covered the tops of our boots and our feet were soaking wet, blisters were inevitable now. It was hard to see a decent footing and it was extremely slippy, every step down was precarious.

We all fell into a determined and focused silence. One step, two step, three step down and for some daft reason the tune "hit the road jack" just whirred around my head.

With just one more kilometre to go my right knee felt like it was going to burst apart, I had turned over on my ankle a few times as the water had loosened the smaller rocks beneath our feet.

We would have fallen many times for sure if it hadn't been for our walking poles taking up some of the pressure on the downward step.

By the time we reached the bottom I was shivering with cold from the pit of my stomach, my teeth were chattering uncontrollably and I felt a little nauseous. We had to wait for the bus to take us back to the main gate. After half an hour, still no bus. The water poured off our foreheads, noses and chins like we were fully clothed under a cold power shower whilst standing in a wind tunnel.

I could bear it no longer. I told Sepison, I'm walking back. If the bus comes, stop to pick me up, I need to keep moving, generate some warmth or I will pass out. Hubster knew not to second question my decision. He always knows when my dark brown eyes turn black (he says), I am resolute.

Sepison was bewildered and flustered. Kept muttering sorry and touching his heart. It wasn't his fault at all but I didn't have the energy to reassure him.

We would pay him anyway and all would be well in the end.

I fantasised about the plunge pool at Bunga Ray and vowed never to complain about being too hot again.

Not one of the other 145 made it either.

But we did our best and had it not been for Mother Nature throwing a wobbly, I know we would have made it.