18 Months after returning home to the UK following 3 plus magical years living Melbourne, Mrs TJ and husband are returning down under once more. We returned in October 2016. 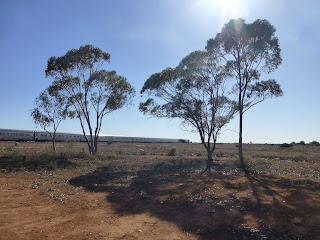 I was so busy working in the clinic, even treating clients on the same morning we left for the airport that I barely had chance to get excited about the trip. In fact I was rather "cranky" truth be told, I was getting over a cold and feeling pretty frazzled. Gareth, on the other hand was like a little boy on Christmas Eve and had definitely been ready to go for a week or more.

As ever he was the itinerary-meister and had done a brilliant job of it too. In all honesty, there was nothing to be cranky about, he had it all sorted, I just needed to pack and follow the leader!

Our trip started in ernest with a glass of pink champagne in the first class lounge at Heathrow.....and breath. We were making the most of the facilities as it would be the last chance we would ever be able to use it now that Gareth was no longer doing those transatlantic business trips and building up his airmiles.

We both enjoyed a "runway ready" facial and massage and kicked back. The only fly in the ointment was the conjunctivitis beginning to flare up in my right eye, grrr! By the time we reached Hong Kong it was swollen, weepy and very sore and air conditioning on the flight is no friend at all. We were delayed a good while in Hong Kong as the air conditioning was faulty, so we had to transfer to another plane. After 36 hours in transit we finally landed in Perth.

We took a taxi to the Flag Motor Lodge and our heads hit the pillow at 3.30am. Four hours later with our body clocks awry, we were at the car hire place and set off south on the 3 hour drive down to the Margaret River region of south west Australia.

As we drove, I had to keep pinching myself that yes, we were back. I had a lump in my throat, it was so wonderful to see the red earth, the iconic gum trees and the azure blue sky like no other. My eyes were so heavy and the straight roads were so hypnotic, that given the jet lag, I could barely keep them open. I had no appetite for food at all and I felt quite feverish and sick. Don't you just love jet lag?

We stopped in Bunbury at a farmers market "mart" for a reviving coffee and Gareth indulged in his first "Aussie" meat pie which he devoured pretty sharpish.

Eventually, we arrived in Margaret River, the town itself was small, really charming and a little sleepy in a bohemian kind of way. We pulled into the drive at Basildene Manor, a beautiful Edwardian home built in 1912 set in an elevated position with 14 hectares of mature garden, All the suites were named after a wine variety and we had Chardonnay. It was so very elegant and smacked of a bygone era but by then I was delirious with fatigue and crawled between the crisp Egyptian cotton sheet and fell asleep in an instant. 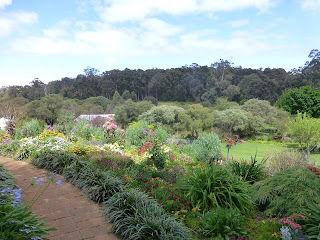 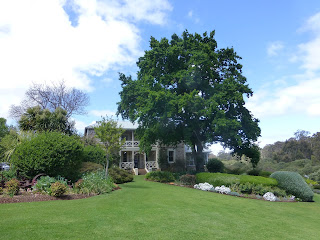 After a few hours kip, we headed into town to stretch our legs and perused the various restaurants for dinner that night, we decided upon a seafood grill place, oddly named Katch-Up as the Donningbrook Marron (crayfish) on the menu was most appealing. We then headed down to the beach, famous for its surf (and more recently great white shark sightings) and lay on the sand gazing out to the Indian Ocean. It was hard to believe we were back in the "lucky country". It was a warm, kind of home-coming feeling. 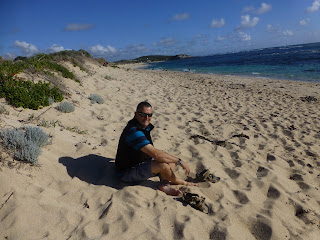 We stopped at the Sea Garden Cafe and sat in the sunshine where Gareth enjoyed his first bottle of Crown lager (his favourite) and I sampled a glass of the local Cabernet/Merlot from the Leuwinn Winery. Sat up high, we looked out over the ocean allowing the swirl of alcohol to relax and mellow and all felt quite right with the world. Sometimes silence really is golden.

That evening after we had dined out on our Donningbrook Marron (which was rather disappointing sadly) we returned to the Manor and slouched in leather armchairs in front of the fire, it is still chilly at night at this time of year (Spring). By 9pm those cotton sheets were calling us once more and we turned in.

The following morning we felt much brighter, we had slept as heavy as bricks and I had a deep crease right across my cheek where it had hit the pillow and stayed put all night I'm sure.

Breakfast was served in the light and airy conservatory overlooking the magnificent gardens. Far yonder we spotted a beautiful male, red Kangaroo grazing on the vegetation at the edge of the gum forest, he was a big fella and the fencing around the property ensure the prized roses and herbaceous borders were not on his breakfast menu.

Our menu however, was incredible, poached pears, fruit compotes, fresh fruit platters, yogurts, breads and pastries and a huge cooked breakfast selection too. With my appetite revived, it certainly set us up for the rest of the day. 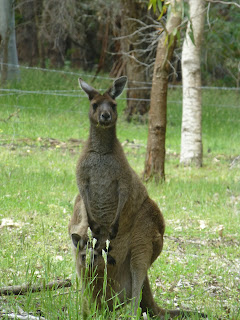 Incredibly it was at this point that my blog just suddenly disappeared. I just couldn't access it in anyway nor source who or what or where it was being hosted now. I was distraught and concluded that I had been a victim of a fairly destructive "cyber-attack".

I spent hours and hours and sought advice from "tech professionals", long hours on the phone and getting nowhere. It was like my foot was nailed to the floor and I was going around and around in circles.

I was exhausted with trying and I had not realised how emotionally attached I had become to the content, hours of work and so many wonderful memories recorded in words and images, just gone!  I just decided to block it from my memory, like it had never happened, it was extremely upsetting and I just couldn't face dealing with it anymore.

I put my head in the sand.

When Gareth fully understood the extent of the problem, he looked me square on and said

"We will get it back, somehow, we will" he was also very upset, he knew how much I had put into it and the hours I spent compiling the content but most of all, yes OUR very special memories we had made during an extremely special time in our lives were lost from our view.

Yes literally 2 years later, (so very lapse of me) I felt ready to try and have another stab at retrieving Mrs TJ Downunder. I was gearing myself up for the battle so to speak.

Not to bore with the details, my luck arrived when a local tech guy came to clean up my laptop and John proved to be the "saviour of tmy blog", 10 hours work and conversations in a language that could have been in Japanese to me and he brought it back from the ether.

I heard the magic words from a tech guy he was talking to in the States, "Hey I think she's up, do we have a kangaroo on the header and wow, I'm getting hungry I can see a photo of huge prawns on the bbq"

"Yes thats it!!" I squealed with delight, relief and the tears came, Gareth rushed into the office and was equally elated.

So here we are. I am going to try and retrace my steps from our trip back to Oz nearly 2 years ago as it was, as ever incredible. For those who have enjoyed reading the blog I hope you continue to do so. Life has been very full since we returned home with many changes occurring.