The build up has been ridiculous.

Cometh the day, cometh the man. 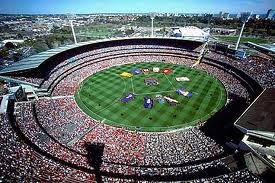 The Australian Football League is not just a sport but a religion here.  It has all the marks of a religion, passion, weekly attendance, rituals, refusing other codes, hymns, membership, and sadly conflict at times.

Whether male, female, young or old, the Aussies go nuts for their footy.

Today is the GRAND FINAL between Hawthorn (Hawks) and Sydney (Swans). The air is tingling, it's the only thing you see and hear about, everywhere you go.....and has been for weeks.

I can't tell you what a huge event in the calendar this is. Shops and restaurants close or make a big deal of the fact that they are open but will be showing the game.

Businesses close for the day, the gym I go to is closing early and the roads will be empty.

It is far bigger than the FA Cup Finals back home, I think it is more akin to the Super Bowl in the USA.

The finals are always held at the Melbourne Cricket Ground (MCG), there is always a massive Grand Final Parade through the city the day before and thousands pour onto the streets and everything grinds to a halt.

That happened yesterday and in spite of the Spring downpour, spirits were not dampened.

Last night there was a massive, free, Grand Final Rock Concert at the MCG and people started queueing overnight for a seat in the ground. 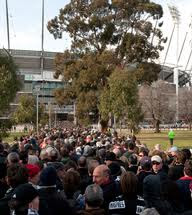 There will be gatherings of "mates" and families and hundreds of BBQ's lit all over Southern Australia today.

More beer and more pie n sauce (the obligatory fare) will be consumed today than on any other day of the year.

The supermarkets have been selling AFL special addition "pie n sauce" crisps and all in all it's pretty mental. 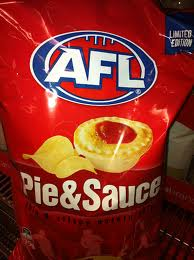 There's no escaping it, so we will be backing Hawthorn "The Hawks!"
Posted by Mrs T-J at 23:55