Our travels then took us down the East Coast towards Freycinet National Park and Coles Bay. (pronounced fray-shun-ay)

As we drew closer we began to see more evidence of Tasmania's history as a British penal colony, garrison towns like Campbell Town still bore landmarks from those harsh and very brutal days and the colony trail is now an established tourist attraction.

In Northern Tasmania the landscape had been so reminiscent of home with it's rolling hills of lush green, cattle, sheep and agricultural farms, wild hedgerows and winding country roads. At times it was hard to believe that we were almost as far from home as one could possibly be.

However, the landscape soon became much more familiar with all that pertains to Australia. More rugged, arid and of course a mass of majestic gum trees that we have both come to love.

We had booked a beach house for the week on a "luxury accommodation" website. However, The Beach House at Coles Bay was not what we would term luxurious at all. It was all a bit shabby, scuffed, dated, in need of some love and rather grubby too. The pictures as ever had looked so good on line and so were the reviews. It was a tad confusing.

However, the view from the glass fronted living room was absolutely stunning, reaching far across Coles Bay and out to the Hazard Mountains beyond. Enchanting. 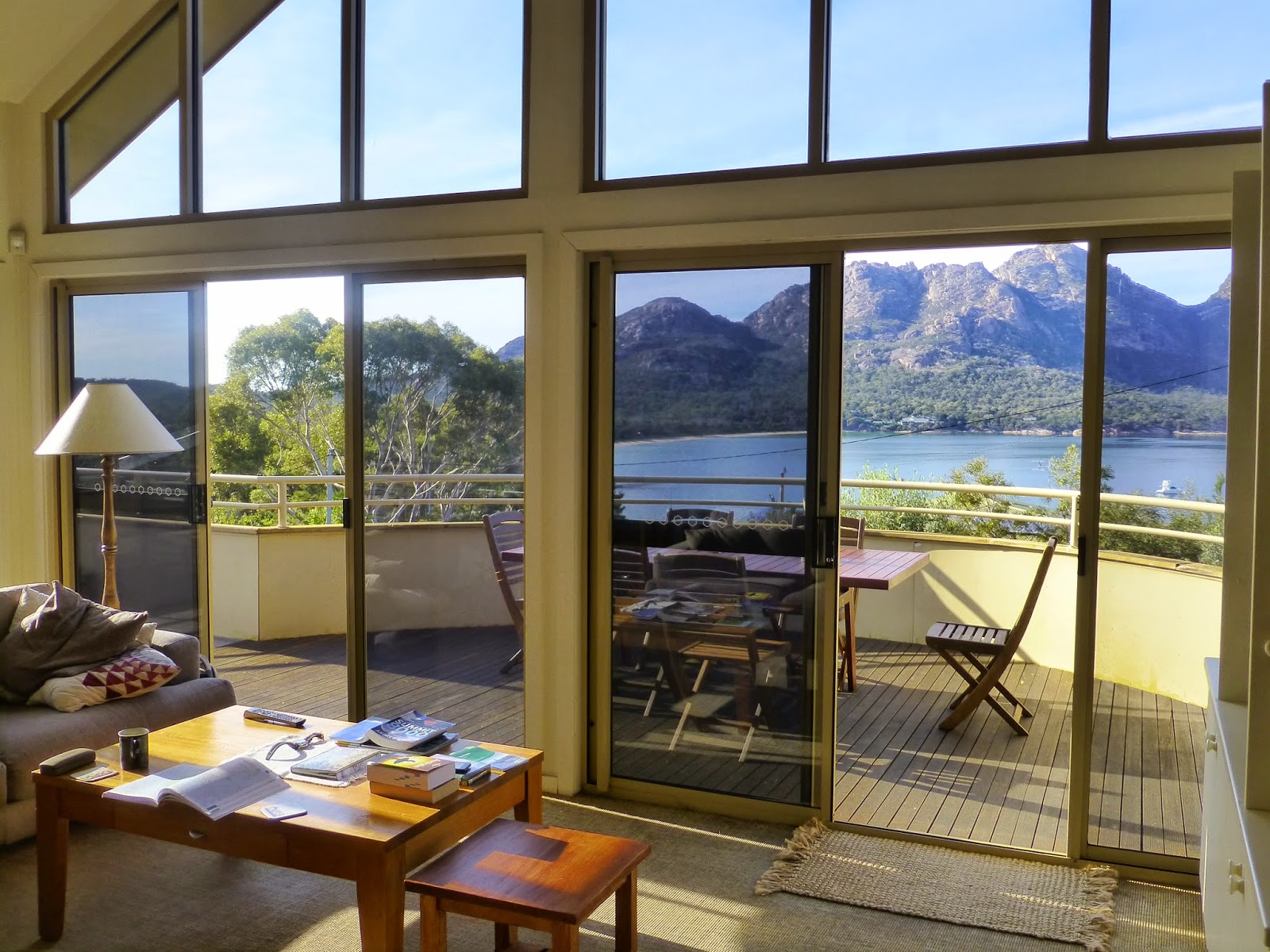 The location couldn't have been more perfect for exploring the area so after a bit of grumbling on my part, I decided to exult the virtues and overlook the rest. Just one thing beat me, how could they provide just one stamp sized hand towel and a little bath sheet each to last us a whole week? (Harrumph!)

My exasperation at "towelgate" became quite the topic for some teasing from the Hubster for the rest of the week!

The weather improved dramatically and we didn't waste time getting our walking boots on and exploring the national park and the beautiful coastal paths skirting the Tasman Sea. 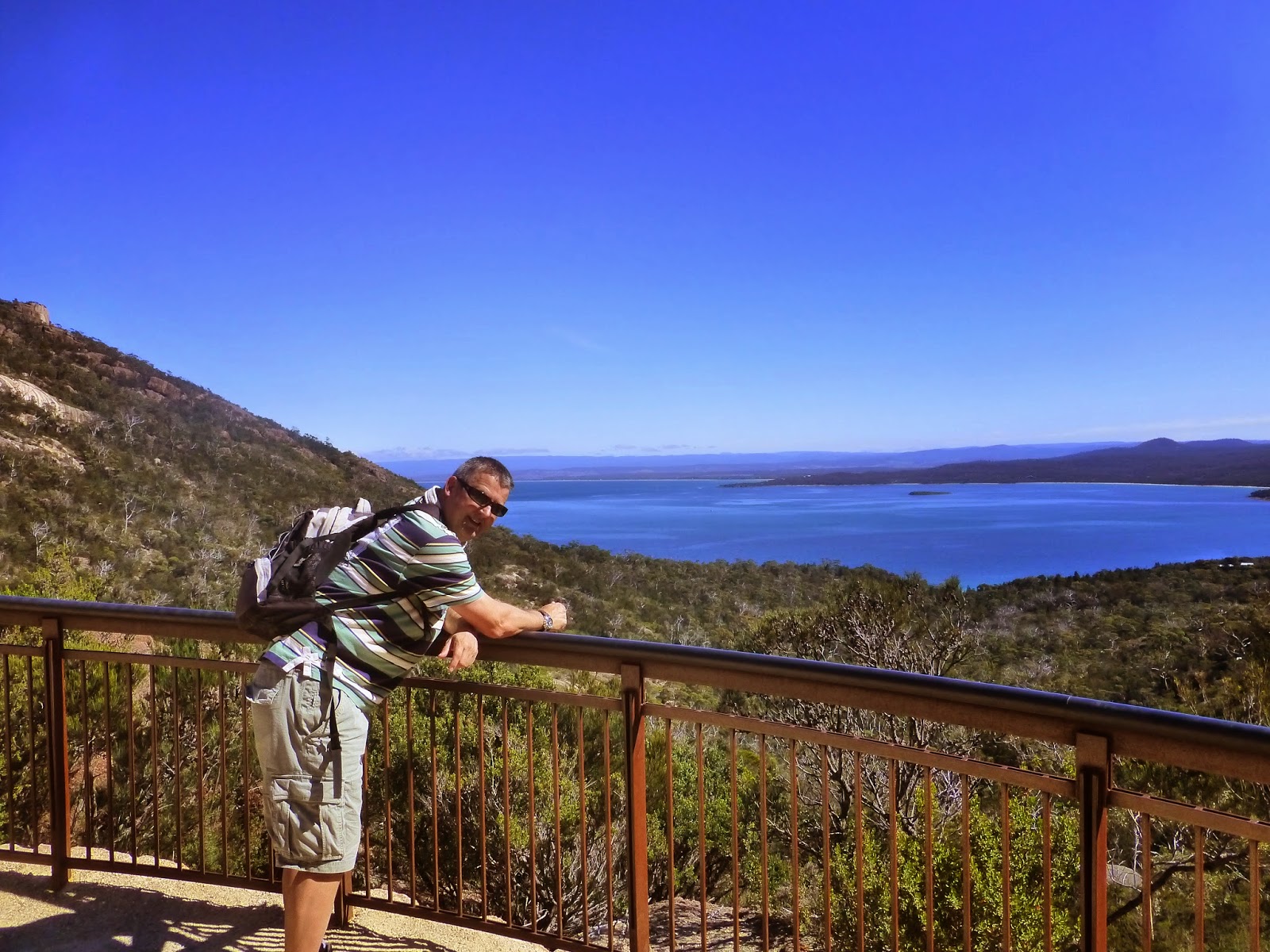 It took just half an hour to reach the Wineglass Bay lookout where the bluest of blue water was quite a sight to behold, all framed in a semi-circle of pure white sand.

However, this whole area had quite a violent past, just over a hundred years ago it was the hub of the whaling industry. Whales were easy pickings as they were freely harpooned on their migration route through the Tasman sea.

Wineglass Bay did not get its name from resembling the shape of a wine glass as many seem to think., the truth is more gruesome than that.  It was derived from the fact that the whole bay would fill with blood from the slaughter and section of just one 40 tonne Right Whale and so resembled a glass of red wine. All this brutality took place in a cove just off shore on an all too regular basis. The population was taken to the brink of extinction.

Viewing such a place of beauty, peace and serenity now, it was hard to believe and I shudder to think. 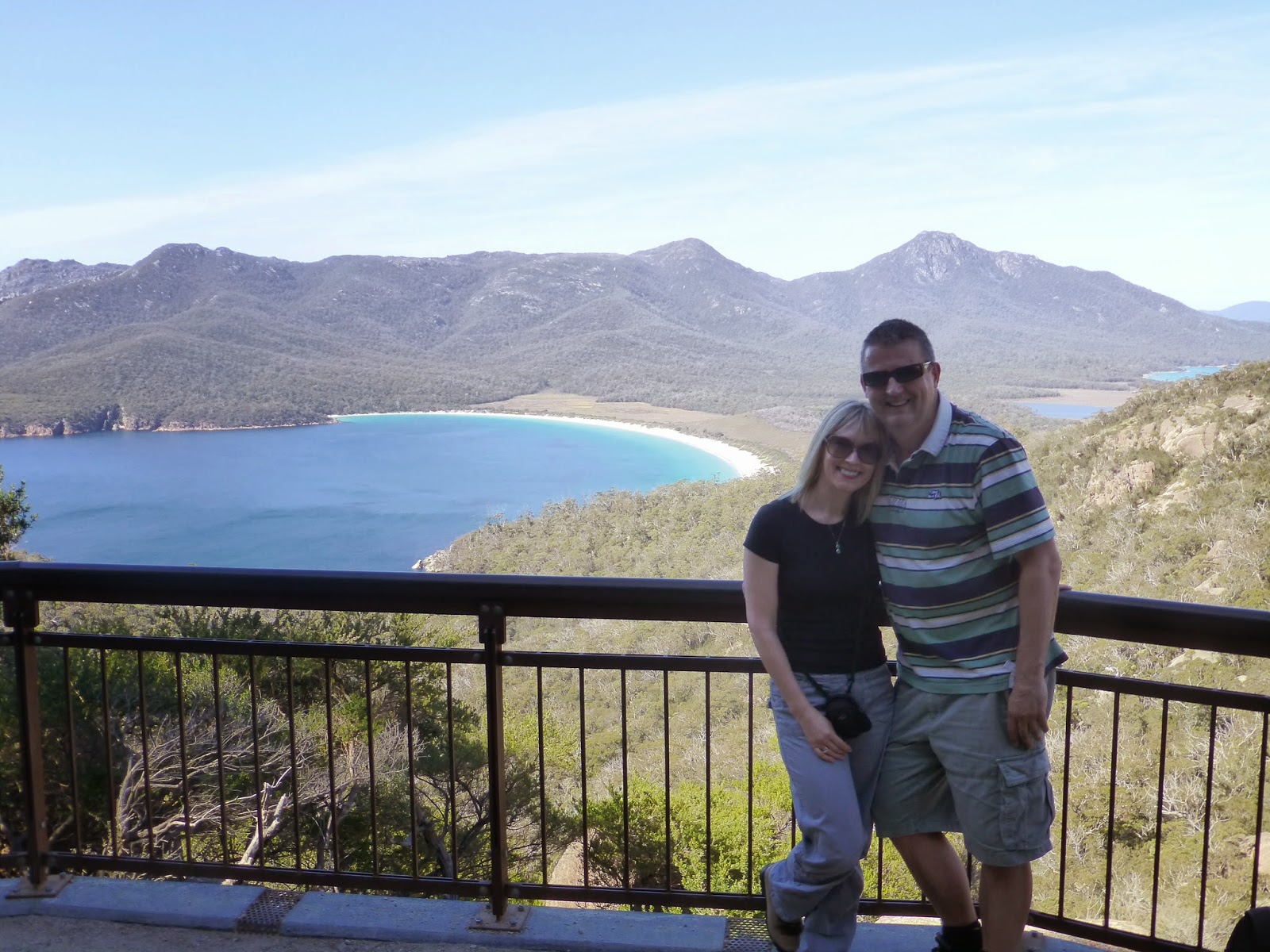 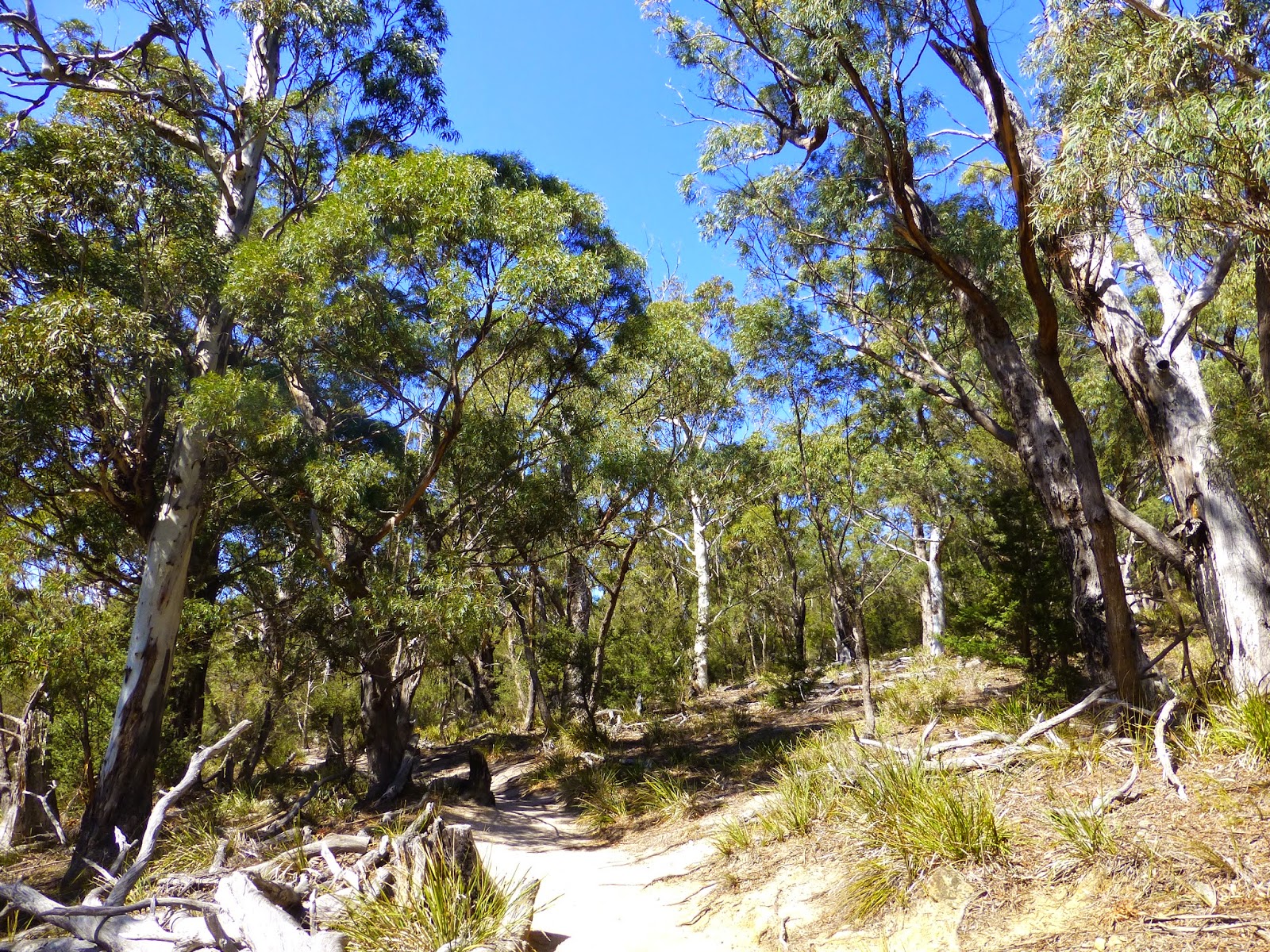 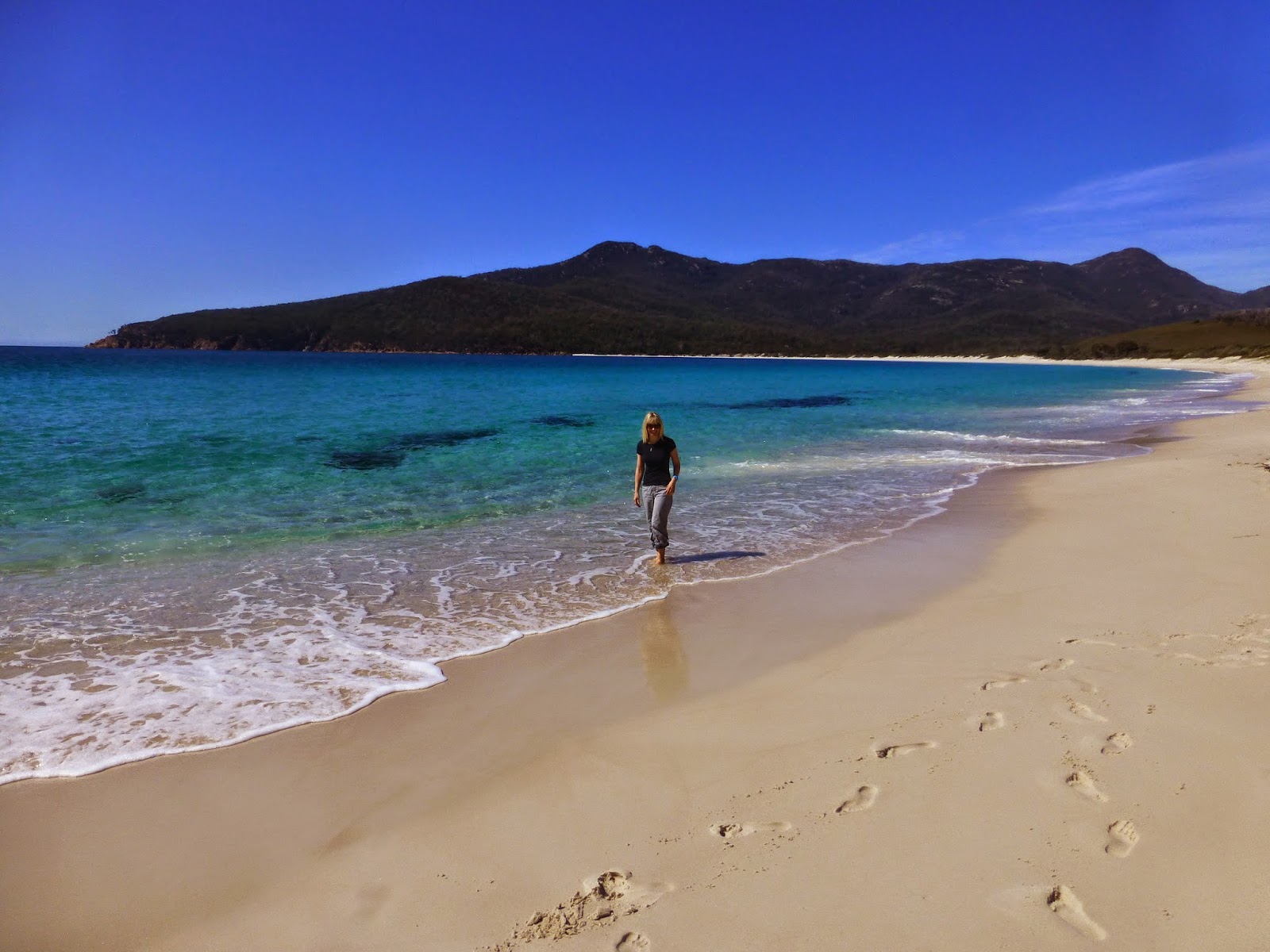 This beautiful 12km walk took us across beaches with virgin white sand, high up on to the cliffs and through the marshes where the cacophony of warbling frogs was quite deafening. 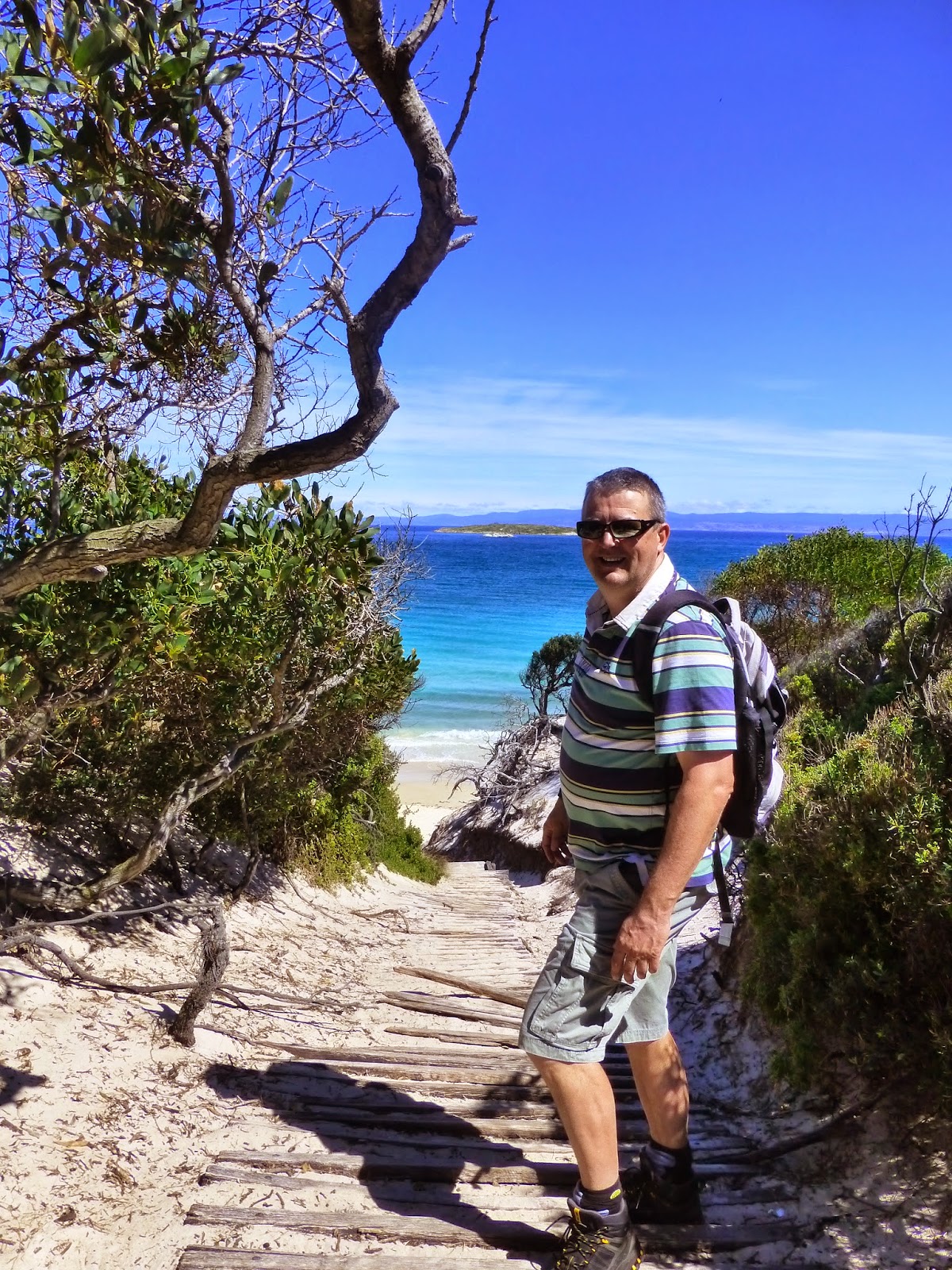 As we took a path down to Hazard Beach, we noticed thousands of oyster shells embedded in the sand dunes. We were quite confused because oysters don't or rather cant grow in sand so how did they come to be there?

I later discovered that 1000's of years ago, long before the colonial invasion of Tasmania decimated them forever, the indigenous Aboriginal peoples of this land were partial to an oyster or two (I can understand that).

Whenever they were in season they would trek for hundreds of miles to feast on them, lots and lots of them! They hollowed out pits in the sand into which they threw all their "empties" so to speak. Now, from the erosion of the sand over time, these buried shells are now exposed and perfectly preserved. How fascinating a piece of cultural history right there! I wonder how many people have passed them without a second thought or like us scratched their heads at the idea of oysters growing in the sand. I think the joke was on us. 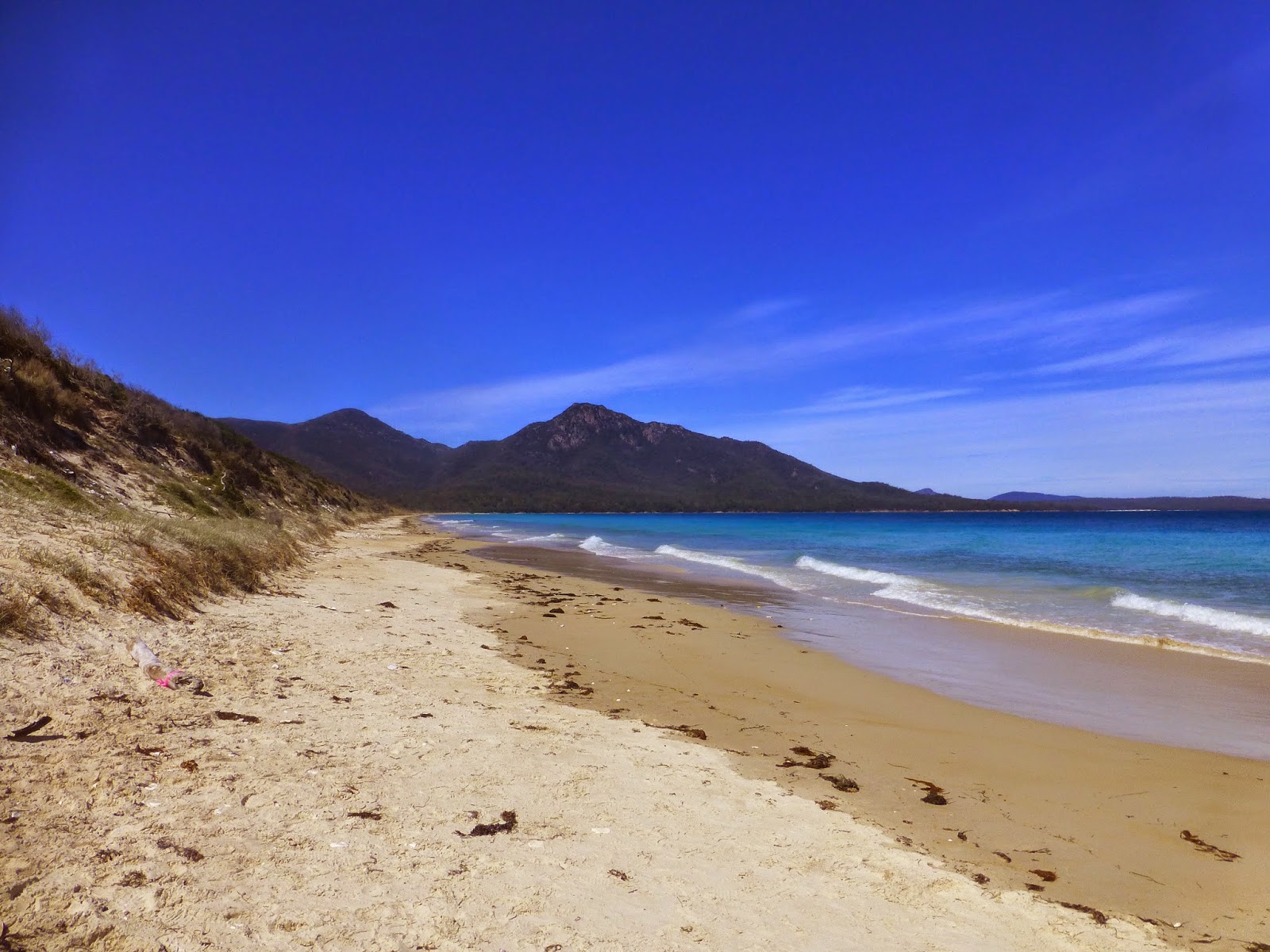 There wasn't another soul on Hazard Beach, so we stopped and ate our packed lunch with the mountain back drop whilst gazing out to sea in contemplative mood. It was really special. 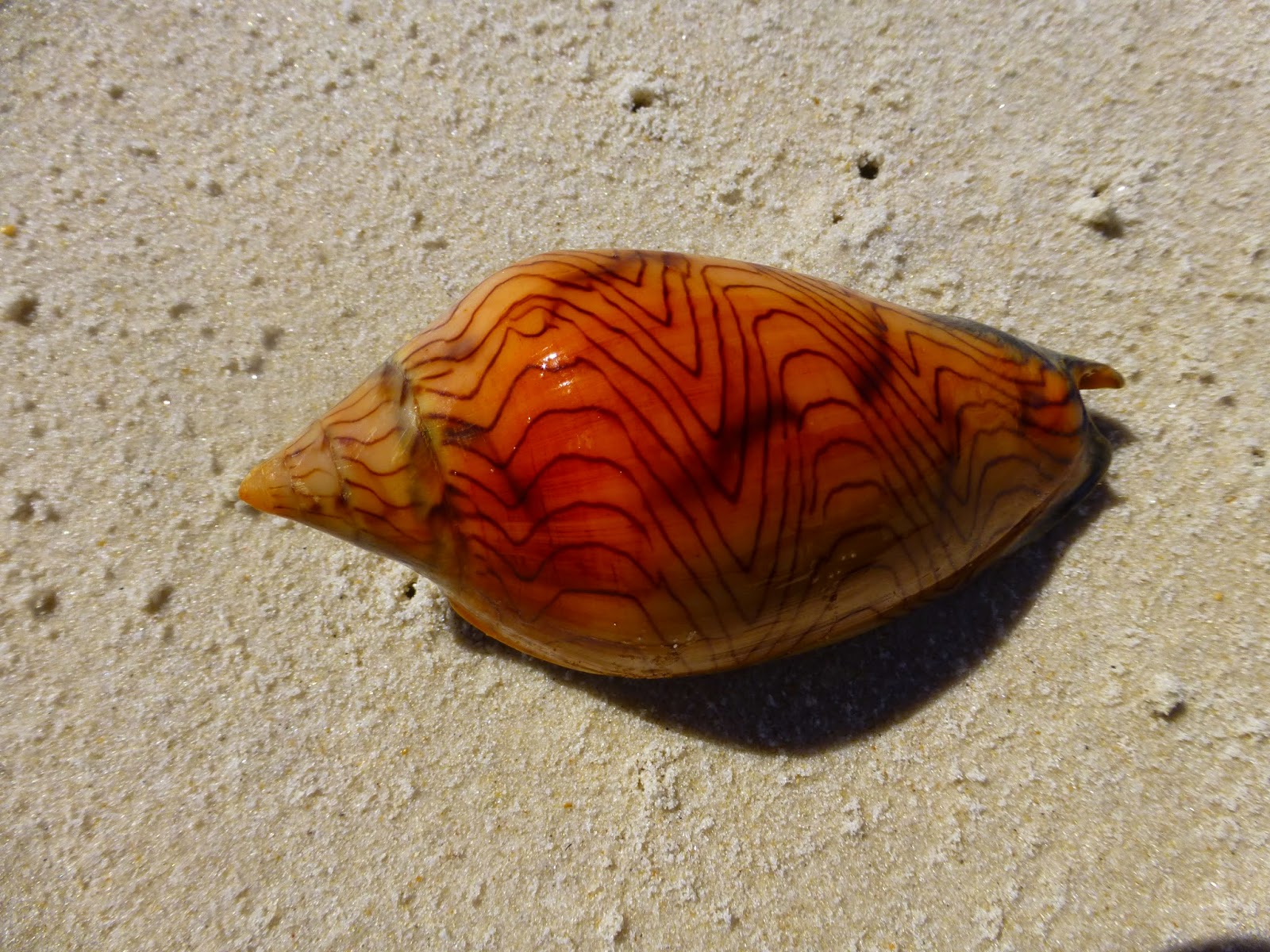 The following day we had planned to climb Mount Amos or the Mountain of Fire as the Aboriginal people called it. However, the weather wasn't so clever and it clearly stated that this was a "fair weather mountain" given that it can be treacherous when wet. 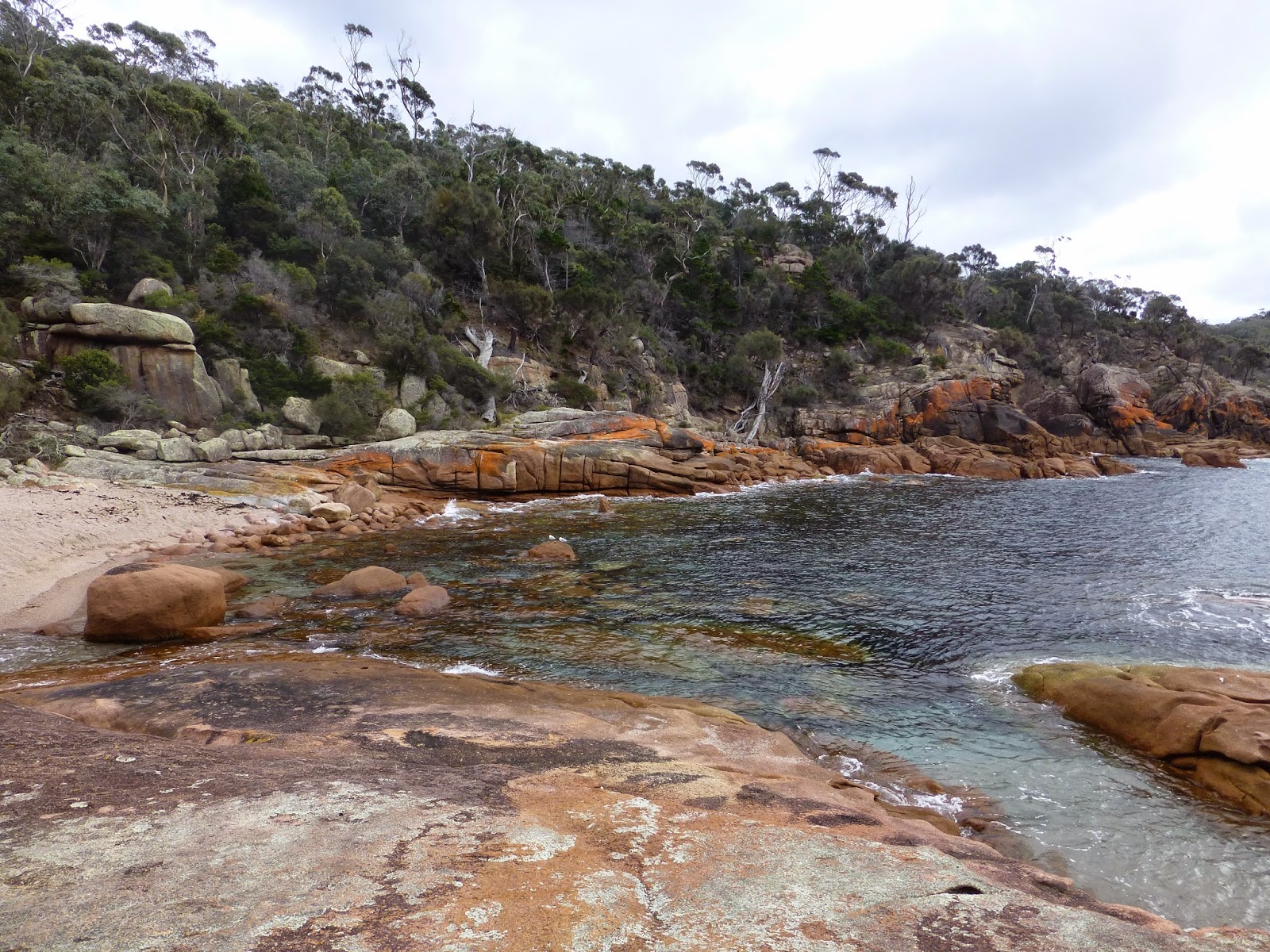 Instead we took a walk down to Sleepy Bay which apparently is not very sleepy at all and can be extremely wild. Luckily it was very calm but we had evidence of its tempestuous nature given the holes the sea had carved into these granite boulders. 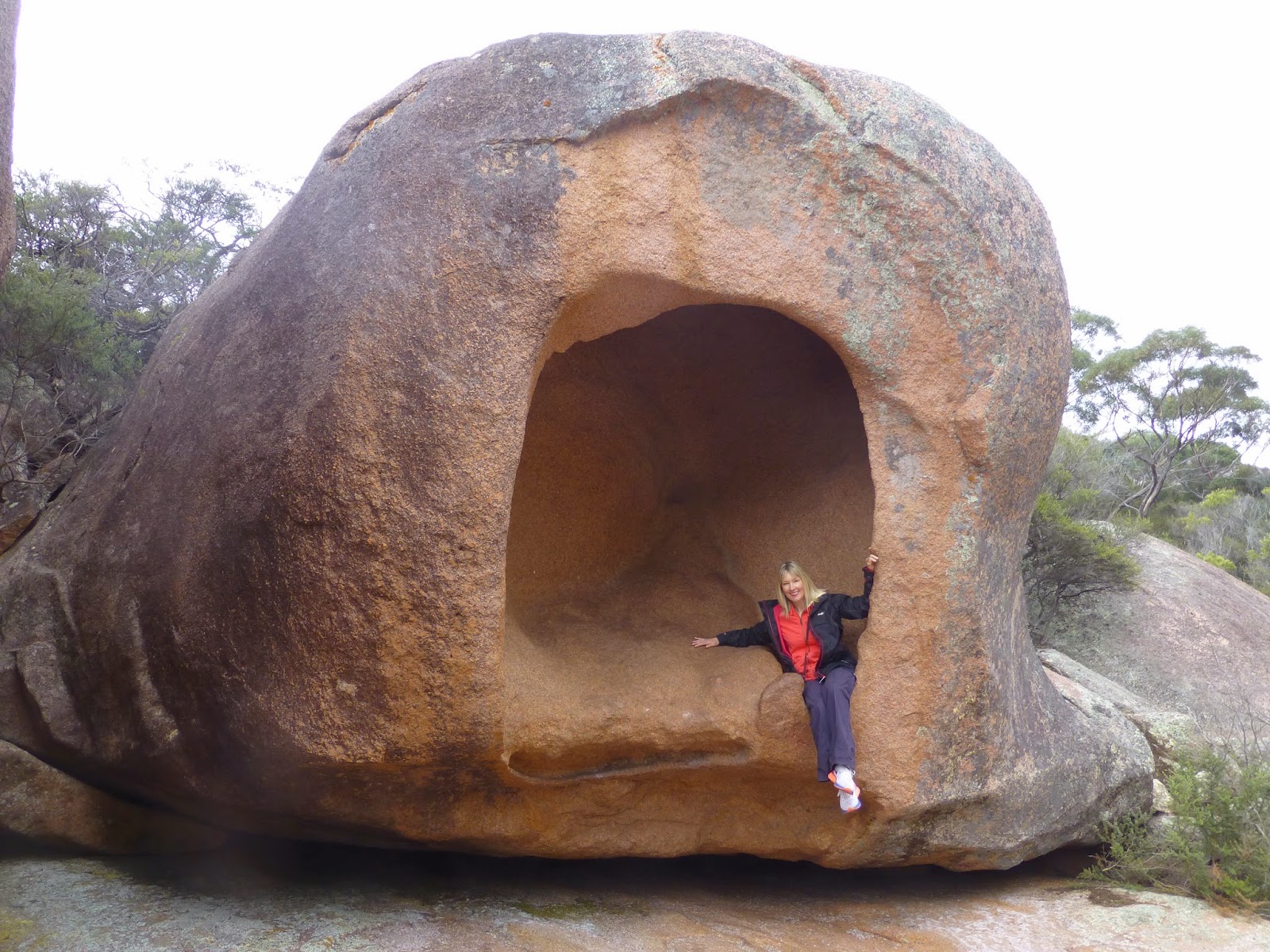 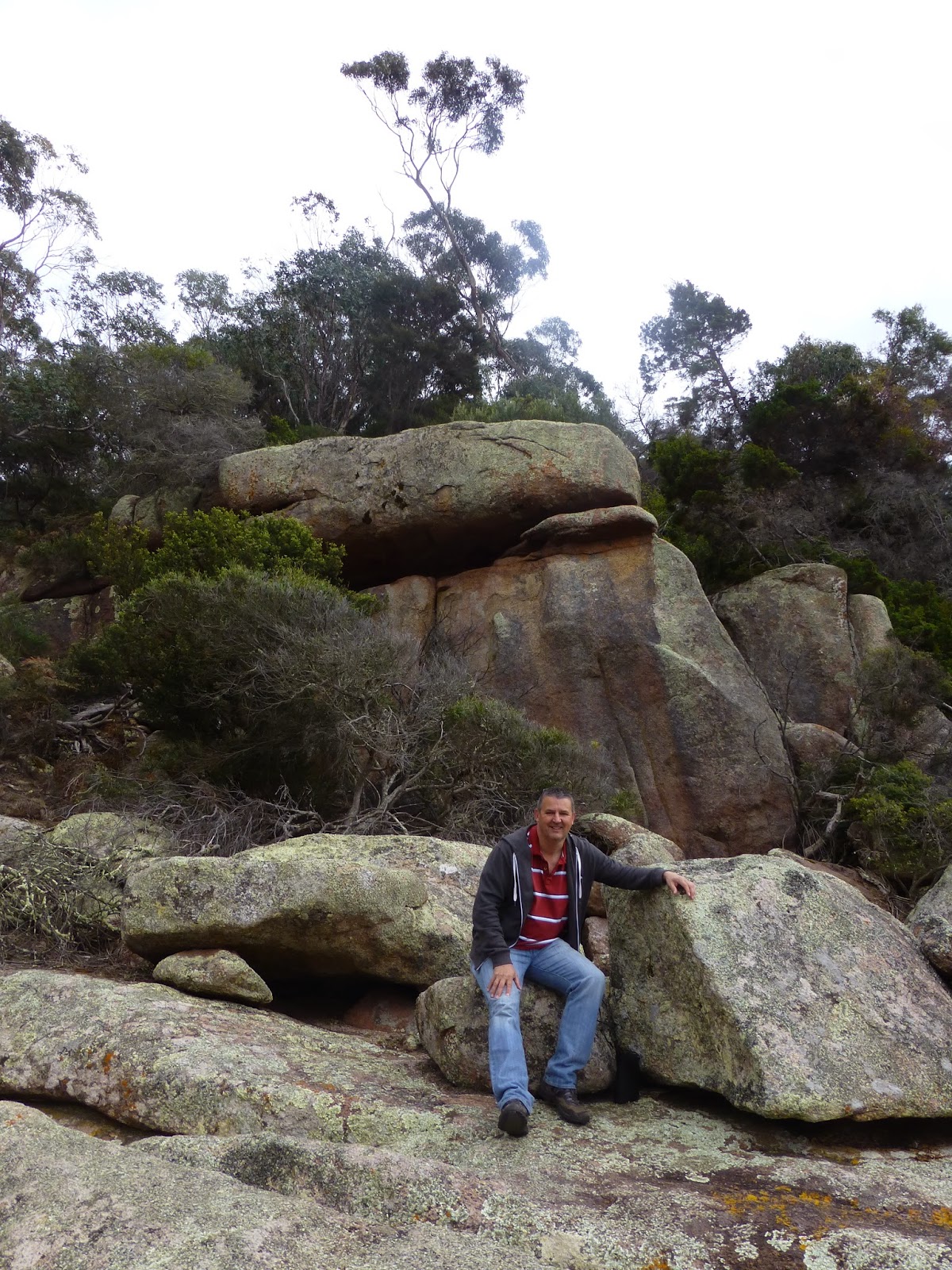 Later that day we took a drive out to another animal sanctuary and we were delighted to see our first Pademelon (a rare kind of Wallaby) and yet another healthy Tassie Devil breeding programme. 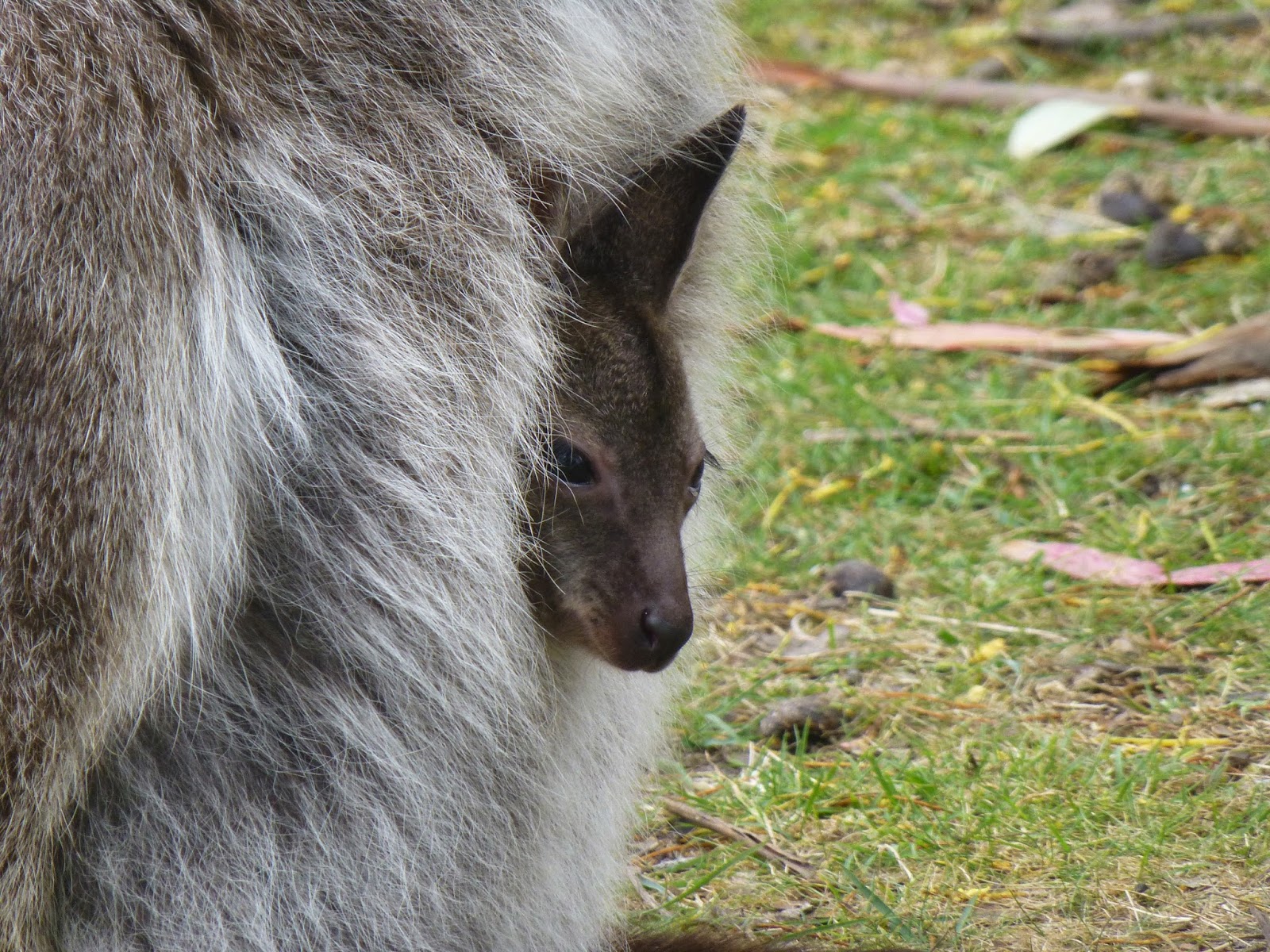 There is nothing more cute than a joey peeking out of mummies pouch. 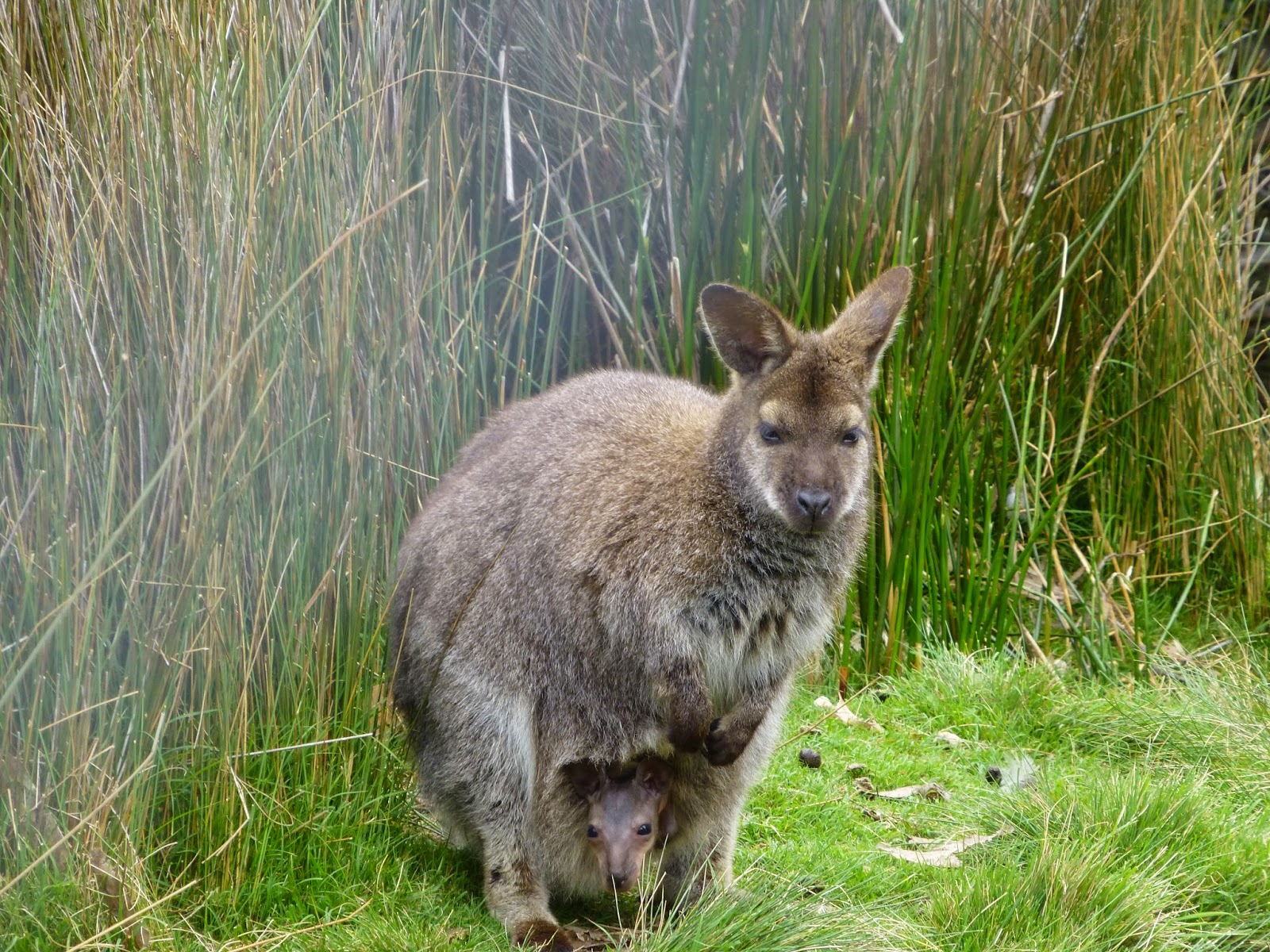 The weather was going to be much brighter the following day, so we planned to do our climb of Mount Amos then. I must admit the prospect did make me feel somewhat anxious, believe it or not I am not at all the best with heights even though I seem to find myself in challenges that often involve them!

Hubster however, was in buoyant, "let me at it" mood. He loves mountains, he reads about life and death mountain expeditions constantly and in his view "mountains are there to be climbed".

The guide book did say that Mount Amos was a climb and a scramble and definitely not just a walk or a hike, you needed a decent level of fitness and definitely don't take children up there.

The fact that the mountain was a kid free zone only encouraged my Hubster more!

The guidebook proved to be spot on, on all counts.
Posted by Mrs T-J at 04:47