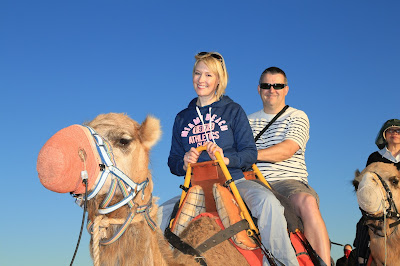 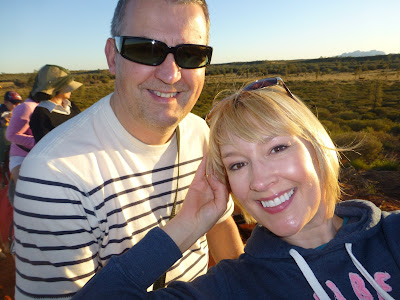 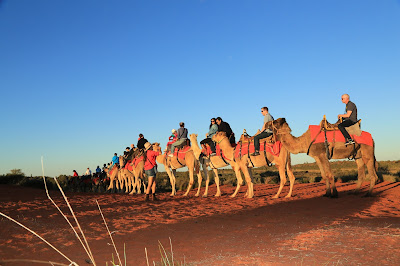 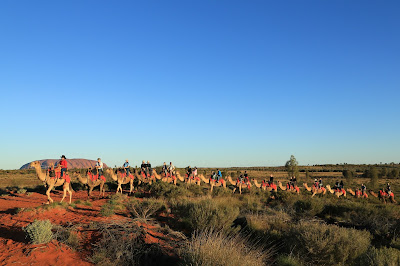 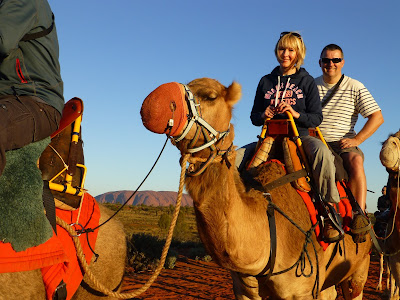 Camels are not native to Australia.

However, there are now around 7 million roaming the outback.

Yes you read that right - Million!

They were introduced in 1860 when the British imported 120 camels to assist in the build of the Telegraph Station in Alice Springs. When all building works were done, the Brits then ordered the slaughter of the camels. However, the handlers could not bring themselves to do this, mercifully and so they set them free into the desert instead.

The rest they say is history.

Today many camels are captured for racing, which is a huge sport here and in Arab countries and the best runners fetch thousands. There are also camel farms as camel meat is extremely healthy, low in fat and cholesterol and of course their hides have many uses too. Camel hair paint brushes are the ultimate luxury for any artist I hear and extremely expensive.

We signed up to do a sunset camel ride, we thought it would be a bit tacky and I am always wary of the use of animals for tourist entertainment. However, I was relieved to see the camels were immaculately looked after, extremely well behaved and very keen to go for their walk. The handlers were clearly passionate about their work and knew the specific characteristics of every single camel on the farm.

We had a teenager called Couscous, who like many teenagers has a short attention span. So she had to wear a nose bag as she has a penchant for nibbling at the saddle of the camel in front if she has to stand around for too long.

Apart from having breath that could only come from the cess pit of hell, she was very charming and effortlessly carried our combined weight of 23 stone!

It turned out to be a trip highlight and I really enjoyed a cuddle with Couscous at the end.

PS The farm had saved and rescued a 5 month old orphan called Scruffy, who is doing really well and was a real sweetie.