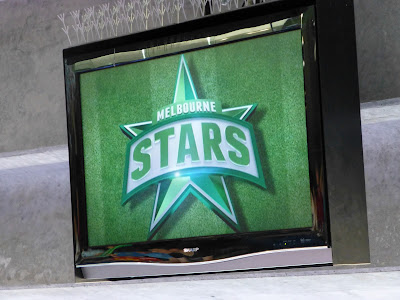 I admit I am not a huge fan of watching cricket on the TV unless it is the Ashes or a nail biting test match.

Going to see it live is a different matter.

The MCG sends tingles down your spine whenever you enter the arena. It just has that special stadium feel where you know incredible things happen.

On Sunday night it was the Big Bash 20/20 cricket, Melbourne Renegades v Melbourne Stars. Fierce rivalry on the pitch was assured and delivered.

We were supporting the Stars captained by Shane "Warney" Warne of Liz Hurley fame!

The atmosphere was incredible and felt more like we were attending an American baseball match than a cricket one.

The Collective, runners up in the Aussie X Factor had all the girls screaming, there were pyrotechnics a plenty and sparkly cheerleaders frantically pumping their pom poms to acrobatic routines. 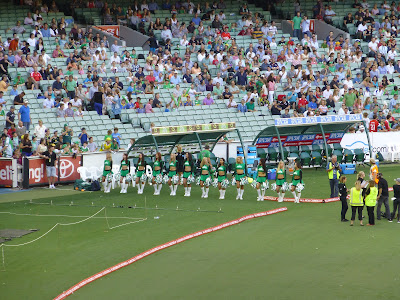 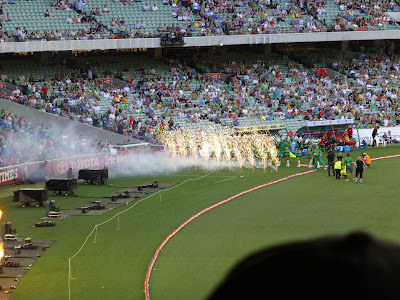 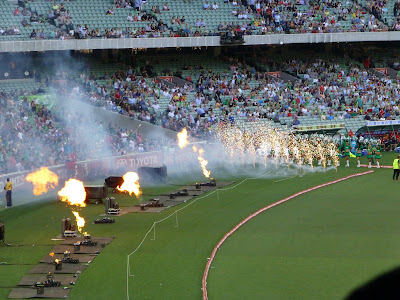 The drama on the field was also full on. Samuels from the Renegades pulled the shirt of one of the Stars batsman to try and stop a run. Warney on the bench got a right strop on which he brought to the field with him and some finger pointing and terse verbals were exchanged. Then Warney threw a ball at Samuels and Samuels petulantly launched his bat into the air!

Girls girls this just isn't cricket! The crowd went berserk of course and loved it!


Soon after Samuels copped a deflected ball off his bat which hit his face guard at a blistering 140kmph. He retired from play with a fractured eye socket.

The Stars were hammered by the renegades, 6's and 4's were flying every where and Warney's boys had no response to the onslaught. 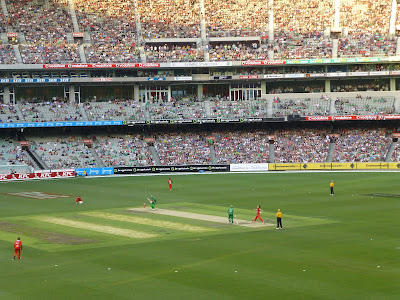 We all made some noise and we all had a great night and it certainly was a Big Bash!
Posted by Mrs T-J at 23:47