The roads in Namibia go on and on and on, barely a bend. In fact bends are so rare that the driver is warned of them with signage long before they appear! Road hypnosis is not only understandable but is something you fight against and if you are a passenger "comme moi" something you regularly succumb to like the proverbial nodding dog! 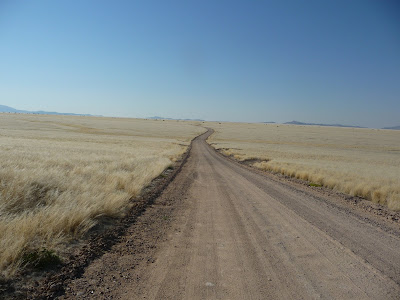 Such is the vast topography of this country that one day we clocked that we had driven 160km without seeing any other vehicle whatsoever, nichts, nada! Mind you, you can see another vehicle approaching from miles away due to the dust cloud kicked up from the pan dry gravel roads.


When you eventually pass another driver you wave frantically at each other like long lost friends.

Vehicles are a luxury that is for sure in this country and available to the very privileged few. Most of the vehicles we see are other tourists like us bombing around in their "bully boy" Toyota Landcruisers.

For the majority of Namibians transport is walking, pony, donkey, hitching a ride and if they can afford it; bus. To own a vehicle a local Namibian on an average shop assistants wage, would have to save every single penny they earned for 15 years in order to buy a second had truck. Puts it in perspective doesn't it?

This country does that an awful lot to you. Putting things in perspective that is. Whilst on the road/transport theme, here is another example.

Whilst refuelling at the quirky hill top town of Gochas, Gareth engages in conversation with a guy at the next pump who has travelled a staggering 100km to fill up his truck. That's like me driving from home to London to do the same thing!

Said gentleman also fills jerry cans of fuel too for himself and his neighbours. Word around town soon gets out that he will be travelling south and a steady stream of local farm workers in blue boiler suits appears, all hoping for a hitch. The gentleman will take as many as he can.

Co-operation like this is how things tend to work in Namibia. It has to. Settlements and farms can be so remote that the "you rub my back and I'll rub yours" mentality is not just a neighbourly national characteristic but is wholly depended upon.

The gift of a lift is highly prized.

This gentleman hasnt just come here to re-fuel and give lifts tho. Whilst he is here he will use the opportunity to tap into the "Bushmans Telegraph", catch up on the goss. Who's farm is doing well, who's isnt, who is selling, who has died etc

There are no tabloid newspapers out here.

Now consider this, if there is only one pump and you are in the queue behind such a character expect to be waiting a long time. Slowly does it here and if you dont subscribe quickly to that mentality then you will soon burst a blood vessel.