A few years back now, I sat on the sofa on a dark winter's night back home in the UK, the wood burner was roaring and I was all snug and cosy, I watched Tony Robinson in a TV documentary all about Port Arthur in Tasmania and the penal colony that was established there.

Tasmania? It seemed like another world, so, so far away.

I was totally transfixed and somewhat morbidly fascinated. It was en route to Hobart, well just an hours diversion off, and I just had to see it or rather more appropriately "feel" it for myself. Hubster was equally as interested.

This is the factual bit....

Today it is now one of Australia's most significant heritage areas and an open air museum.

The site has more than 30 buildings, ruins and restored period homes dating from the prison's establishment in 1830 until its closure in 1877. During this time around 12,500 convicts served sentences and for many it was a living hell. 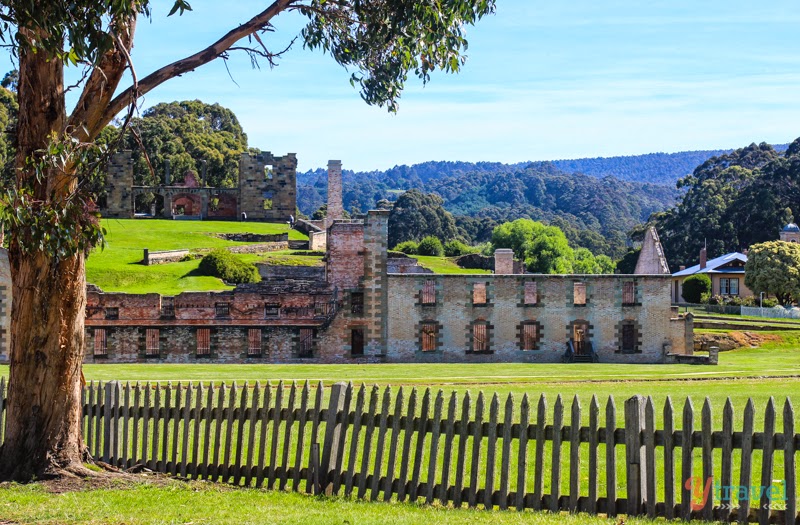 Most of these convicts were transported by ship in appalling conditions from the UK all the way to Tasmania, across some of the most treacherous waters in the world.

How evil these men must have been? Well this is the thing, many of these men were not dangerous and hardened criminals at all (some were of course), but many were banished from their home country and all they knew for such petty crimes as stealing umbrellas and note aged just 13! 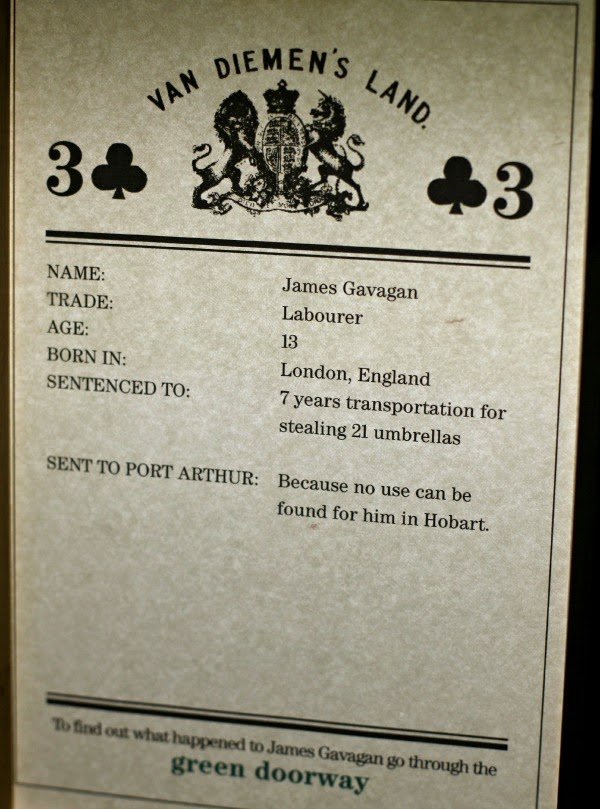 The most heartbreaking story for me was the transportation of a 9 year old boy whose only crime was stealing a box of toys. Show me a child that hasn't stolen another child's toy or would've if they could've!

Port Arthur has a violent and troubled history as a penal colony, yet it’s pastoral beauty brings this contrasting sense of peace and happiness too, I cant explain that, its something you have to feel by being there. 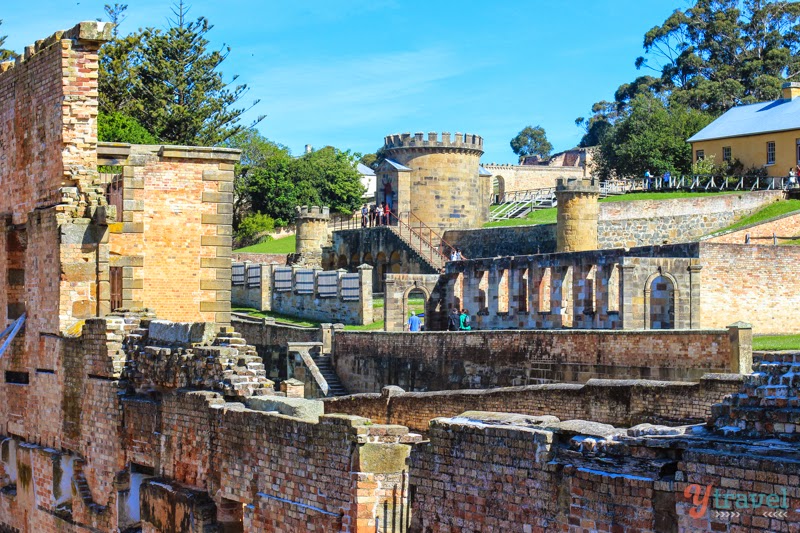 It was bizarre that such evident cruelty, punishment and incarceration was also the place for such incredible innovation and creativity. Here an extensive library of some 13,000 books was housed, a highly efficient working farm was run, Here, beautiful landscaped gardens and allotments were kept and the most advanced ship building yard of its time along with 30 buildings with impressive examples of masonry and architectural design were built.

All of this work was carried out by the same convicts who had to endure sleeping on freezing, wet stone floors, in sodden clothes, in cells with iron bars, all open to the perishing elements. It can be bloody freezing in Tassie. The very same convicts were also regularly punished with the cat o nine tails or worse and many more suffered greatly with persistent respiratory illness and thousands succumbed to that. 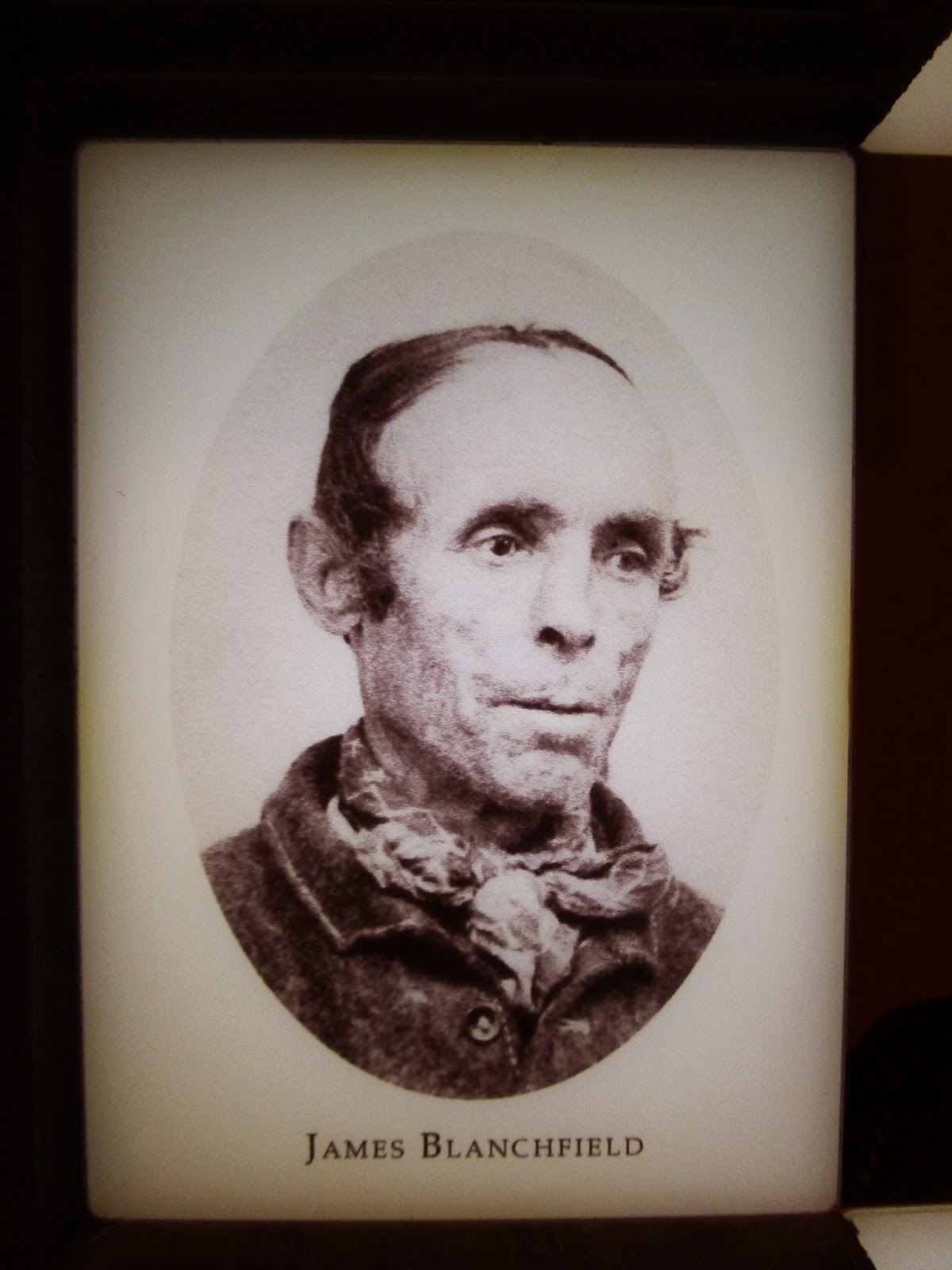 Convicts maybe but these chaps were pretty handy too so to speak. What struck me also was just how small in stature these men were and yet so incredibly strong and resilient. I cant help think or rather hope that in some small way their captors had some admiration for them because I certainly did. 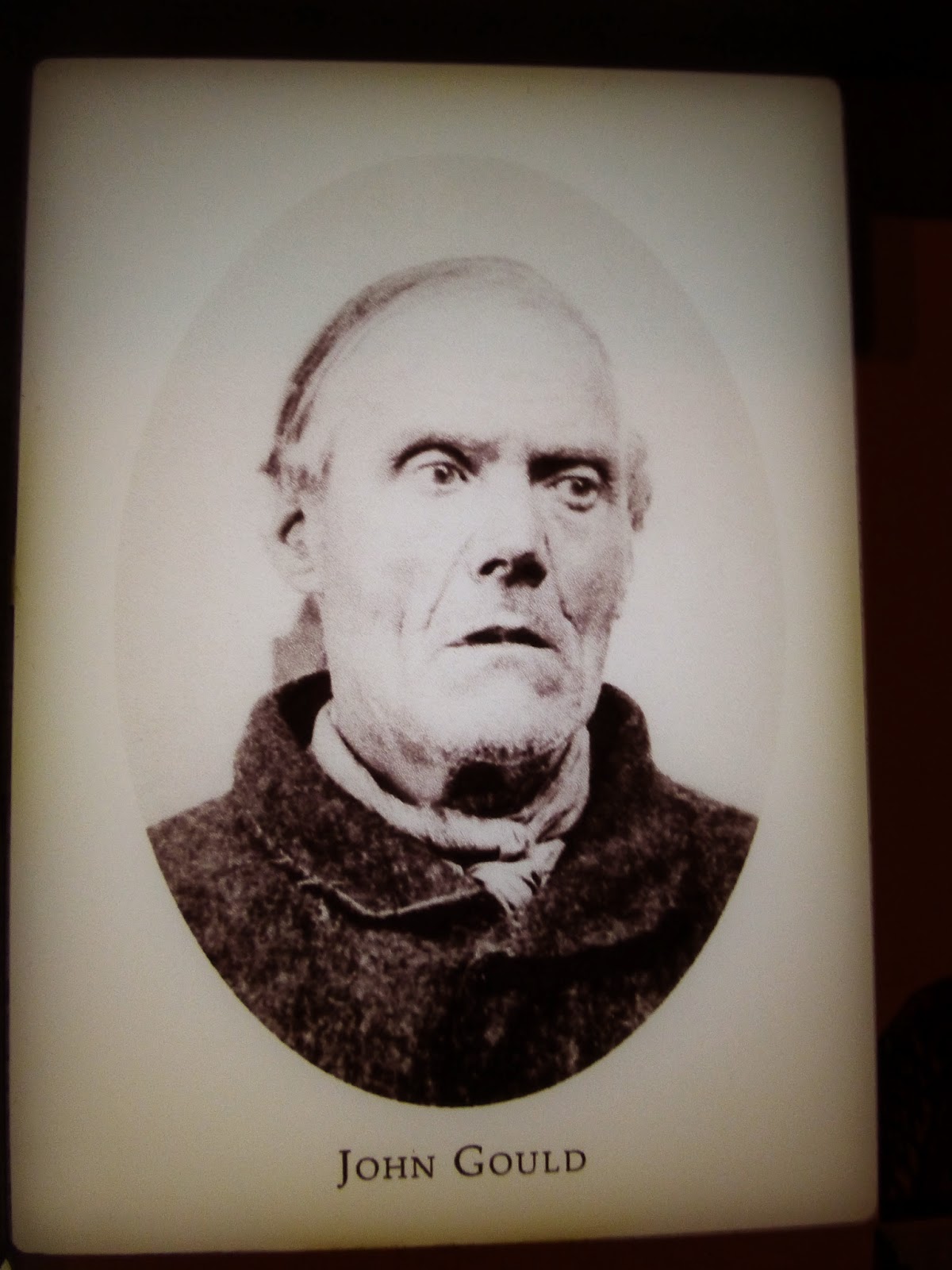 However there was another prison in Port Arthur, set aside from the main building, up on the hill, positioned as such for a reason.

This separate prison was the eeriest place of all and one that made me realise just how cruel humans can be to one another.

I felt the anguish and the desperation seeping from the walls from all who once slumped in those cells, shut off 24/7 from the sensory world. This form of punishment broke more men than the cat o nine tails ever could and their diaries reflected that.

No-one likes the silent treatment do they?

It was designed to subdue the spirit of men, to break them so that they submitted to redemption. The regime was based on silence, isolation, work and religious instruction. The use of soundproof materials and ventilation systems ensured absolute separation and silence. Men spent 23 hours per day in their cell; they only emerged for exercise, school and chapel. Even in the Chapel, with its
separate cubicles, each man was strictly isolated from his fellows.


As time went on, however, Chaplains and Medical Officers expressed concern at the unusually high
number of cases of ‘madness’ among the prisoners. These rates were many times higher than those found at traditionally run prisons .

Men who offended while in the Separate Prison could be sent to‘the dumb cell’ or punishment cell. This cell lay behind four thick doors and was completely light and sound proof. Here men might languish for up to 30 days.

Going back to that documentary with Tony Robinson, he endured the "dumb cell" for 25 minutes and emerged a quivering wreck and in tears. I endured it for no more than 20 seconds, it was pure hell. and incited panic immediately.

The regime was designed to achieve the most intense social isolation and control. A warder sat at a desk in the central hall, keeping an eye on all the cell doors and the corridors. Warders patrolled the corridors in felt slippers, using sign language to ensure that the prisoner heard no sound. Each man wore a mask when outside his cell to prevent communication. At first he was only allowed to read the Bible but later other ‘improving’ books were allowed. He took exercise alone in a small yard and was fed through a hatch in his cell door.  Dozens of rules and rigid daily routines reinforced the inmate’s sense of powerlessness. 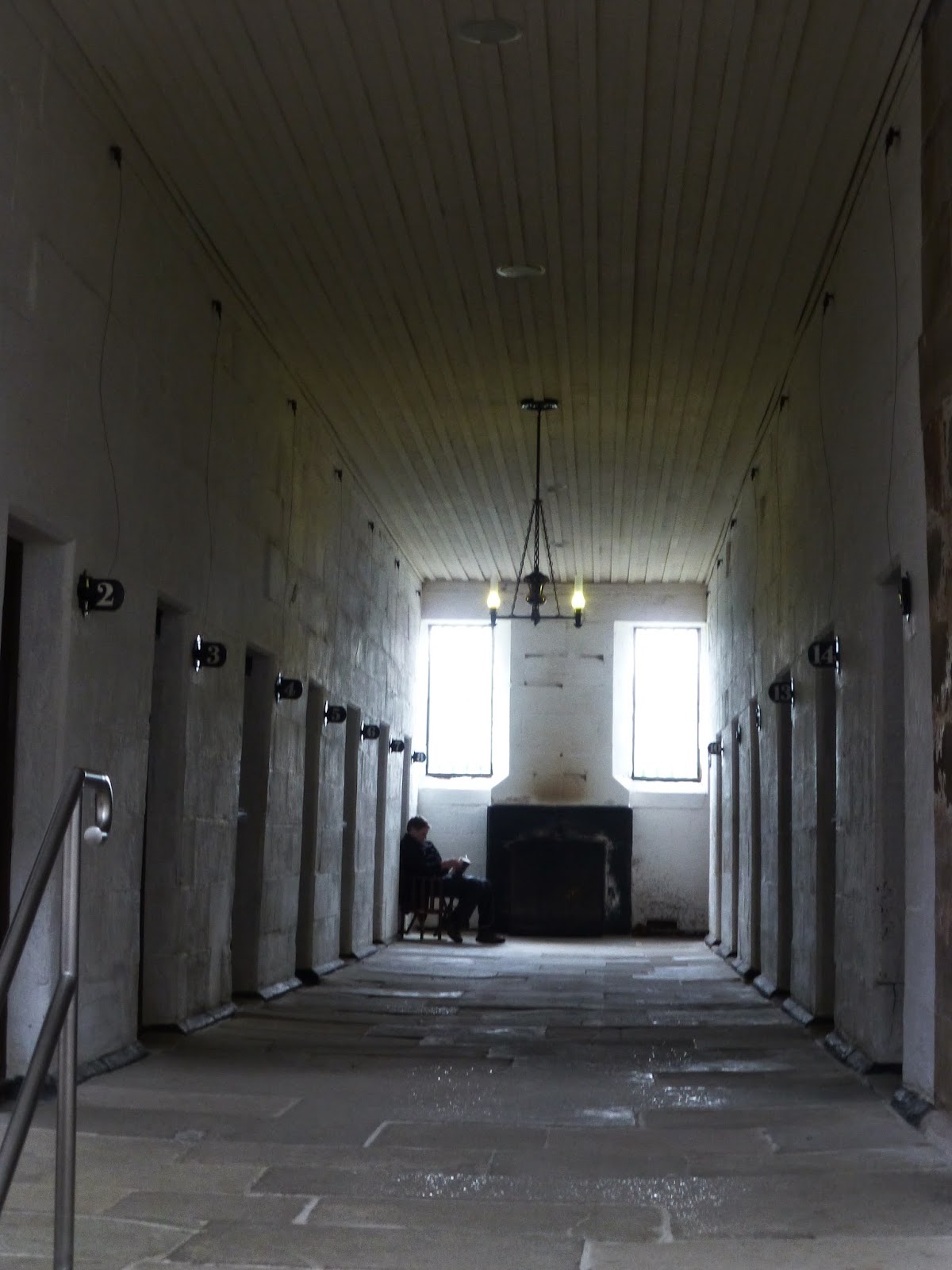 Rather than promoting rehabilitation, this awfully cruel regime certainly ensured the progressive insanity of its inmates.

When you are there, you feel as much as you see and those feelings will live with me always.

That said its important to understand what they went through. Very important indeed.