Our Tassie trip drew to a close in the capital city of Hobart.

We stayed at the Henry Jones Art Hotel, Australia’s first dedicated art hotel, and only one of a handful of such hotels in the world.

It was perfectly located on Hobart’s waterfront and the building dates back to 1804 where it was known as H. Jones and Co. Pty. Ltd. IXL, a jam making factory and one of Australia's most successful businesses back then. 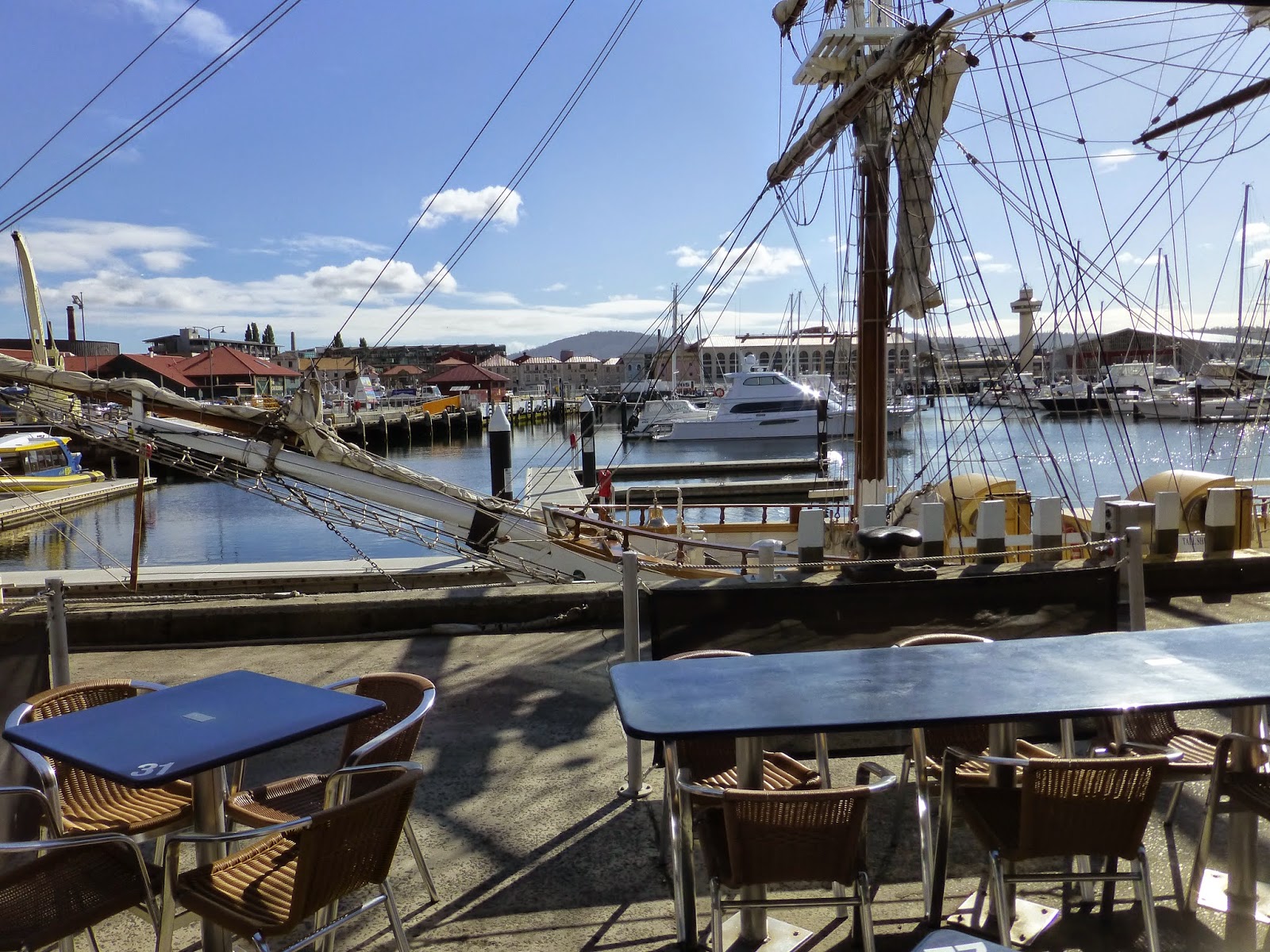 The former jam factory has bee  transformed into a sensitively restored and distinctive, five-star hotel, warm and welcoming but warehouse/industrial too, it was very cleverly done.

We loved it, sometimes these places can be a bit "style over substance" but it wasn't, it all worked just as it should with out being pretentious.

With only a few days in the city we did of course plump for the two main tourist attractions there.

MONA is the largest privately owned art gallery in the world and anyone who has been there will understand when I say that it is just a bit, bonkers!

It is the creation of David Walsh, an extremely successful profession gambler, who sank $75 million of his own money in creating his dream.

What can I say? Its weird, wonderful and at times downright confronting. The whole place has been carved into the side of a cliff and it really does have a "James Bond film set" feel to it.

We arrived at the the gallery on a camouflaged catamaran where we sat on purple, velvet thrones in an area called the "posh pit" whilst being served complementary canapes and wine by waiters in grey boiler suits! Do you see where we are coming from with this?

David Walsh certainly has a sense of humour and enjoys sharing it! Just look at his parking place 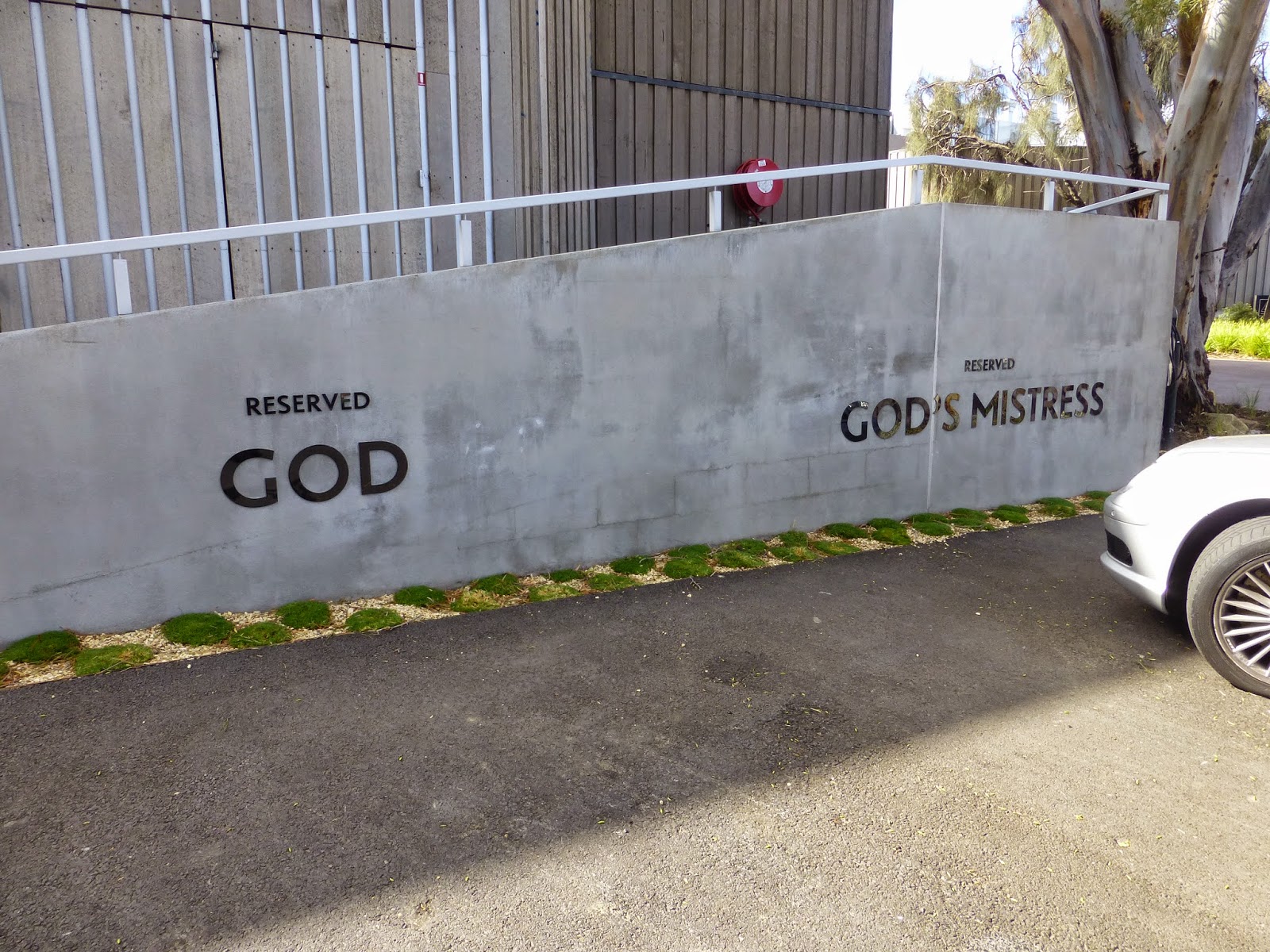 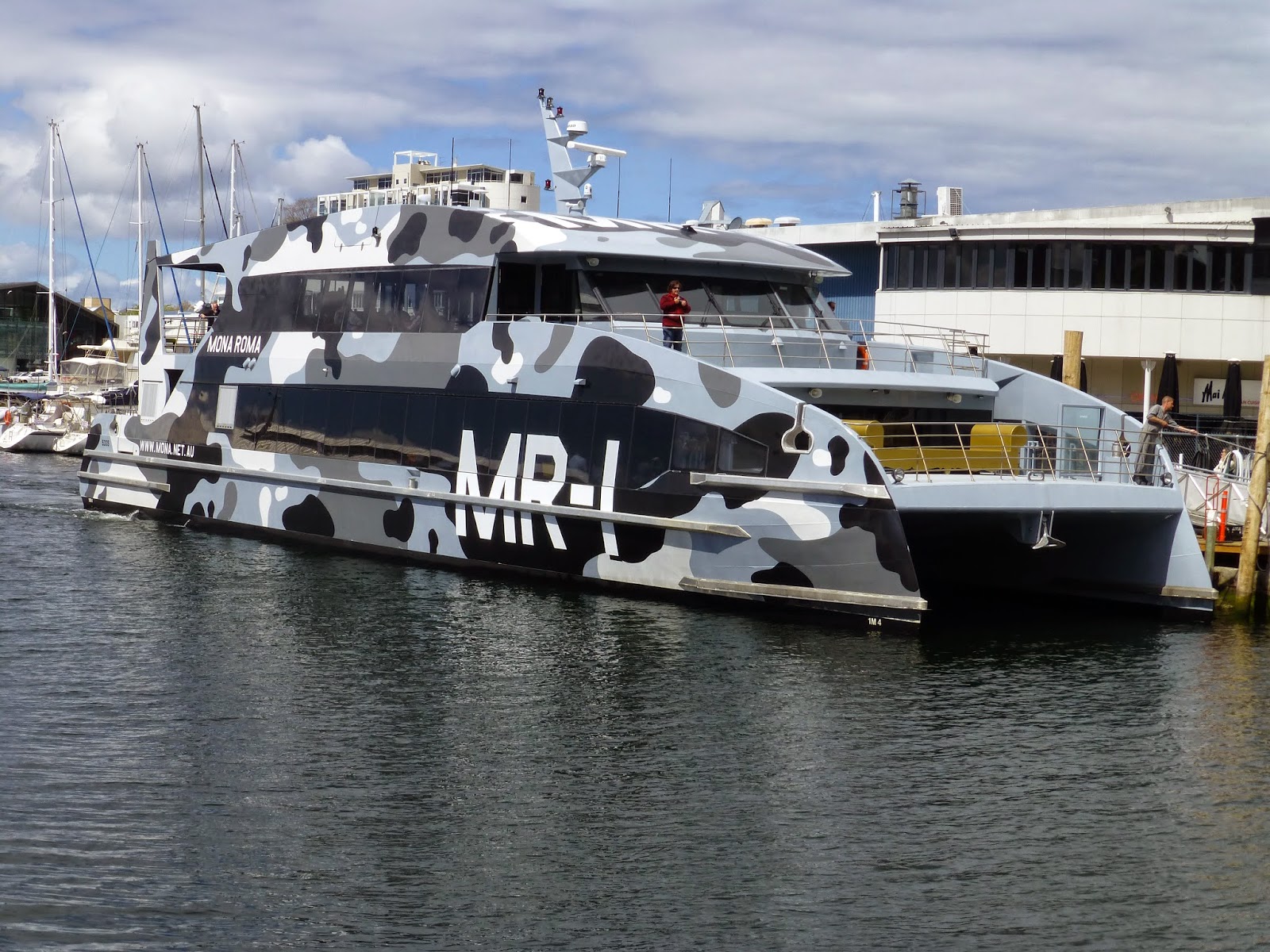 On entering the museum we took a glass lift down into the depths of the cliff. When we stepped out the first thing we came across was a very cool cocktail bar. 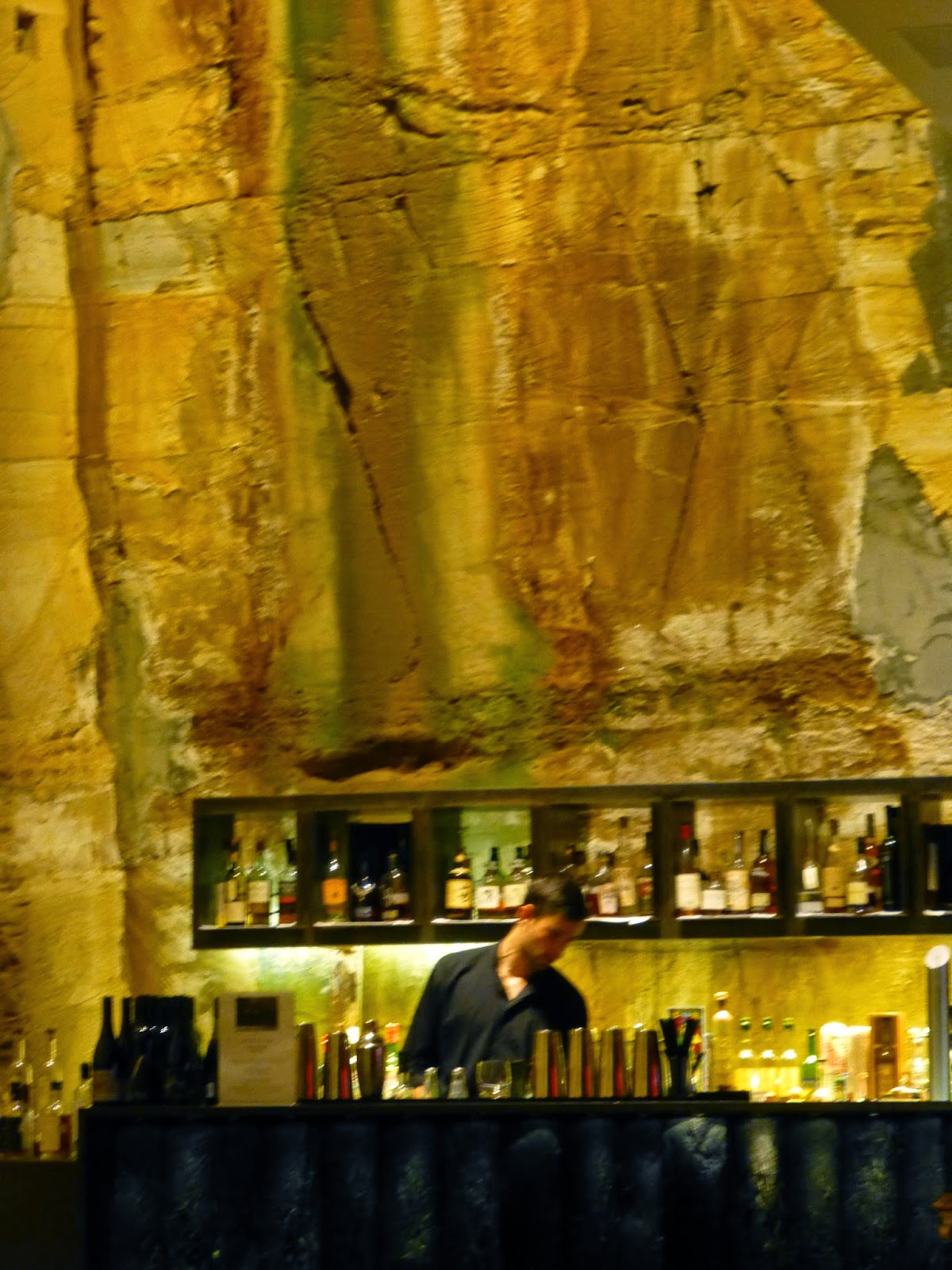 The sandstone walls of the cliff were beautifully lit and of course a work of art in themselves. 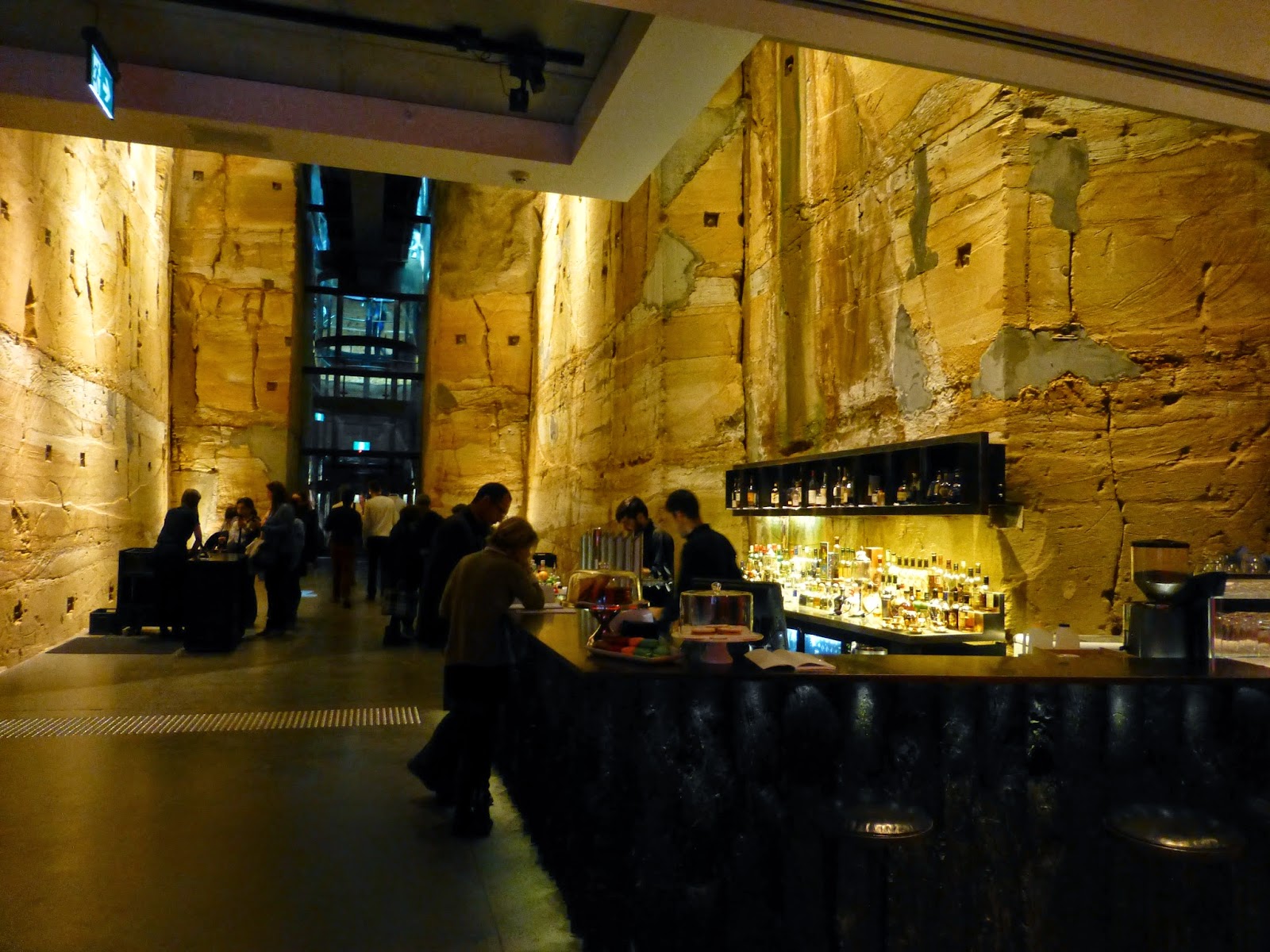 I said previously that some of the exhibits were confronting. Well there was one that had me somewhat agog. Please pardon my language but it was called "Cunts and Conversations". There on the wall at pretty much eye level, were 75 plaster cast molds of well, lady parts! One after the other all in a row, real life casts of lady parts, leaving nothing to the imagination. Underneath each one was "her name".

I was astounded and dare I say it absolutely fascinated in a slightly uncomfortable way. I honestly never knew they came in so many shapes, sizes, configurations and proportions. I wasn't the only one, all the ladies there said exactly the same thing and yes it certainly did incite conversation.

I refrained from taking any photos, that would've been too weird but feel free to google it if curiosity gets the better of you.

As for the men they were not interested at all, nothing to see here, seen it all before or maybe it wasn't the done thing to show too much interest!

Mind you I did think selling the "lady part soaps" in the gift shop was a bit much, I mean who would you ever give one of those to? 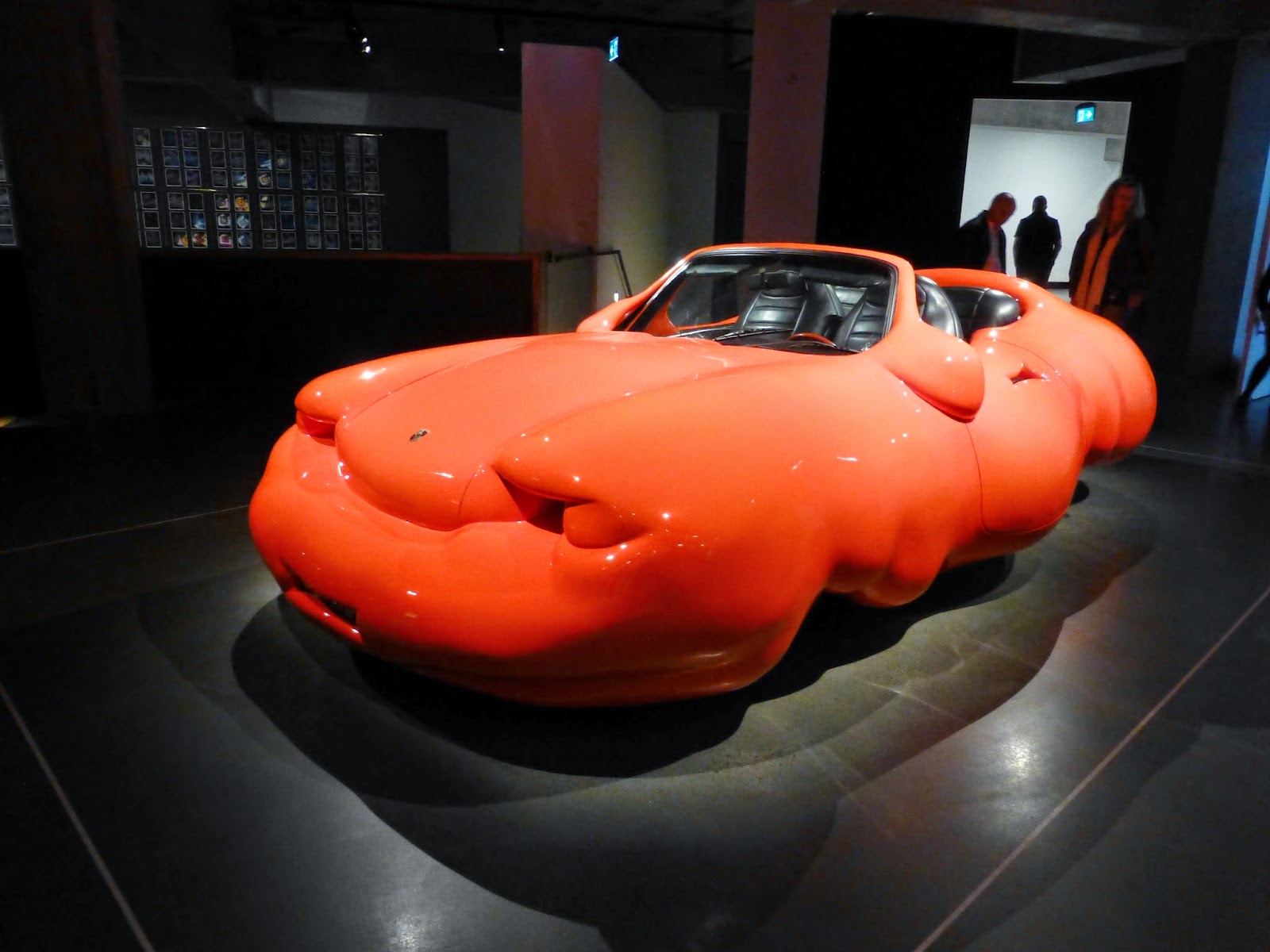 No the boys were far more taken with the bubble shaped Porsche and the "Poo making machine"!

Entering the room the stench hit you like a smack in the face. "What the hell is that?"

"Its the poo making machine"said the guide, who clearly had become accustomed to the affront on his olfactory system.

"Then 12 hours later it produces a poo, look over there, there's today's offering on the plate"

So it was too, perfectly formed poos on the plate preceded by all manner of fetid liquids bubbling and gurgling away in glass containers.

The whole thing mechanically replicated the exact workings of the human digestive system. What kind of mind would invent this?

You just couldn't help admire the ingenuity of it all. It was fascinating.

Of course the boys loved it!

So in essence, this was the way of MONA.

Utterly bonkers but absolutely worth the experience. The lady parts still make me chuckle, one of those images that you just can't un-see!

The Salamanca market is held every Saturday at Salamanca Place. The whole street is closed and comes alive with over 300 stalls selling fresh and gourmet produce, arts, crafts and produce from all over Tasmania.

The weather was lovely and all the coffee shops and cafes were brimming with people sat outside enjoying breakfast and people watching.

We really enjoyed pootling and mooching around all the stalls and soaking up the buzzy atmosphere. 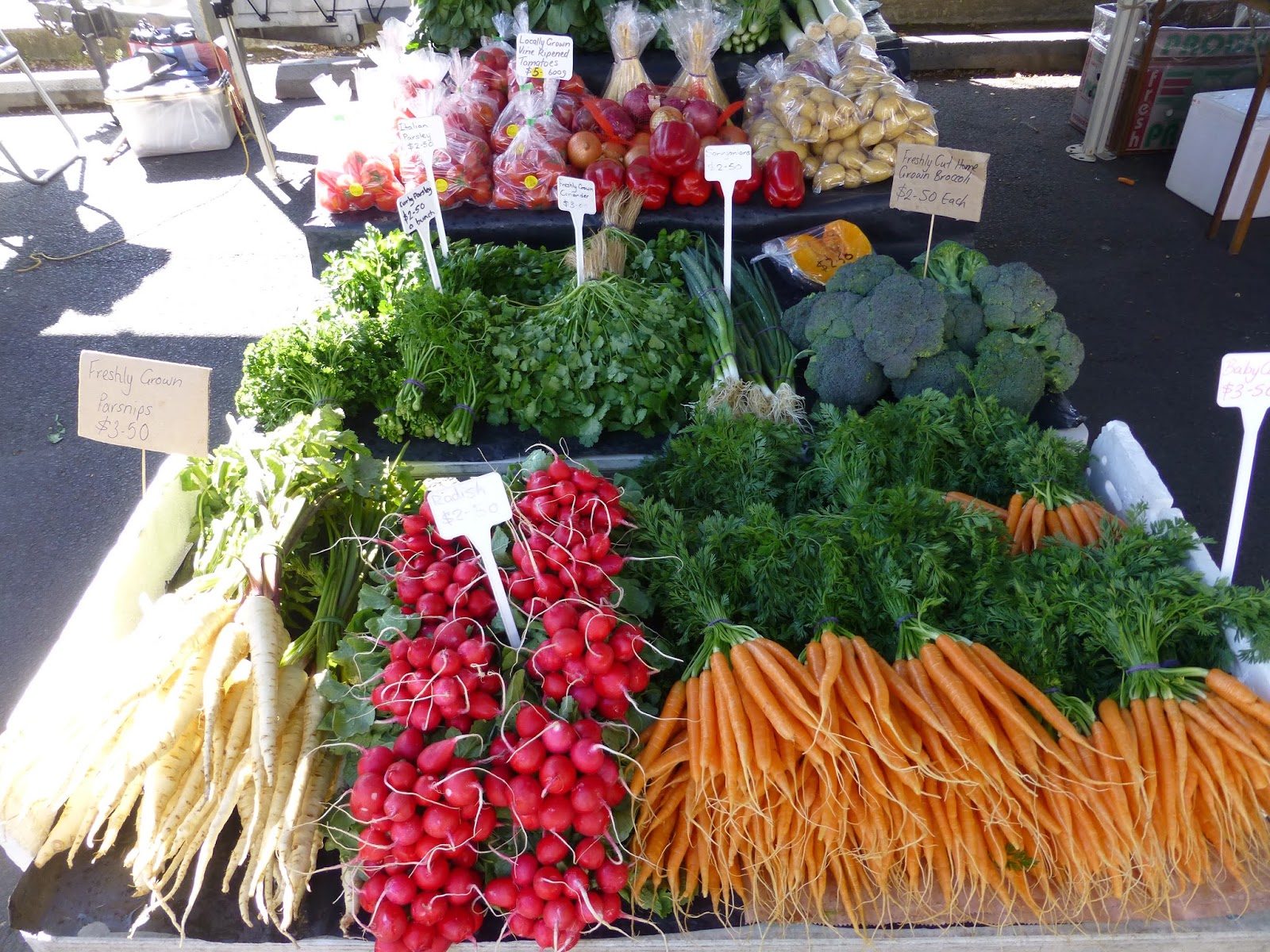 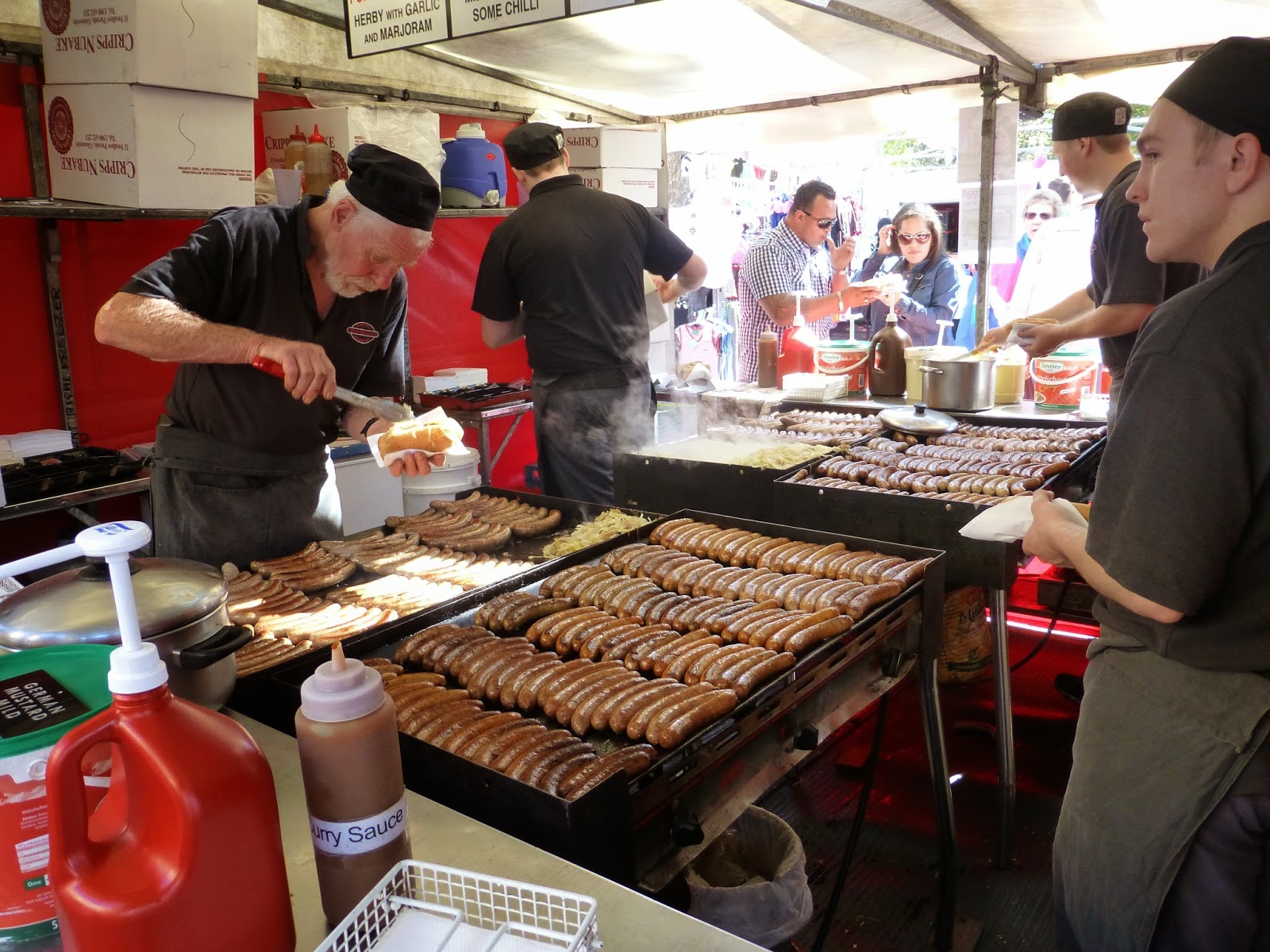 The above stall had got the good old Aussie "Sausage Sizzle" off down pat........ 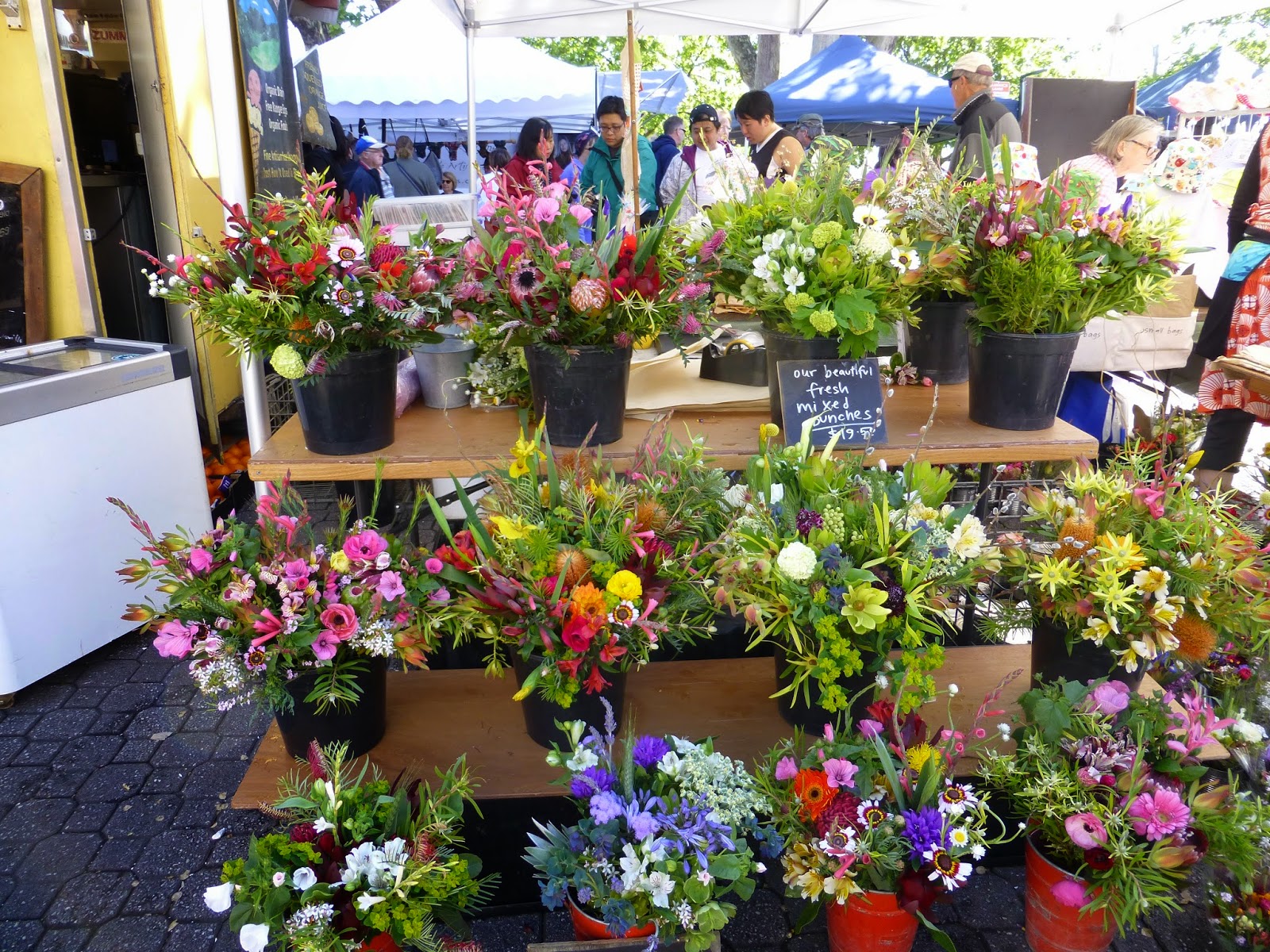 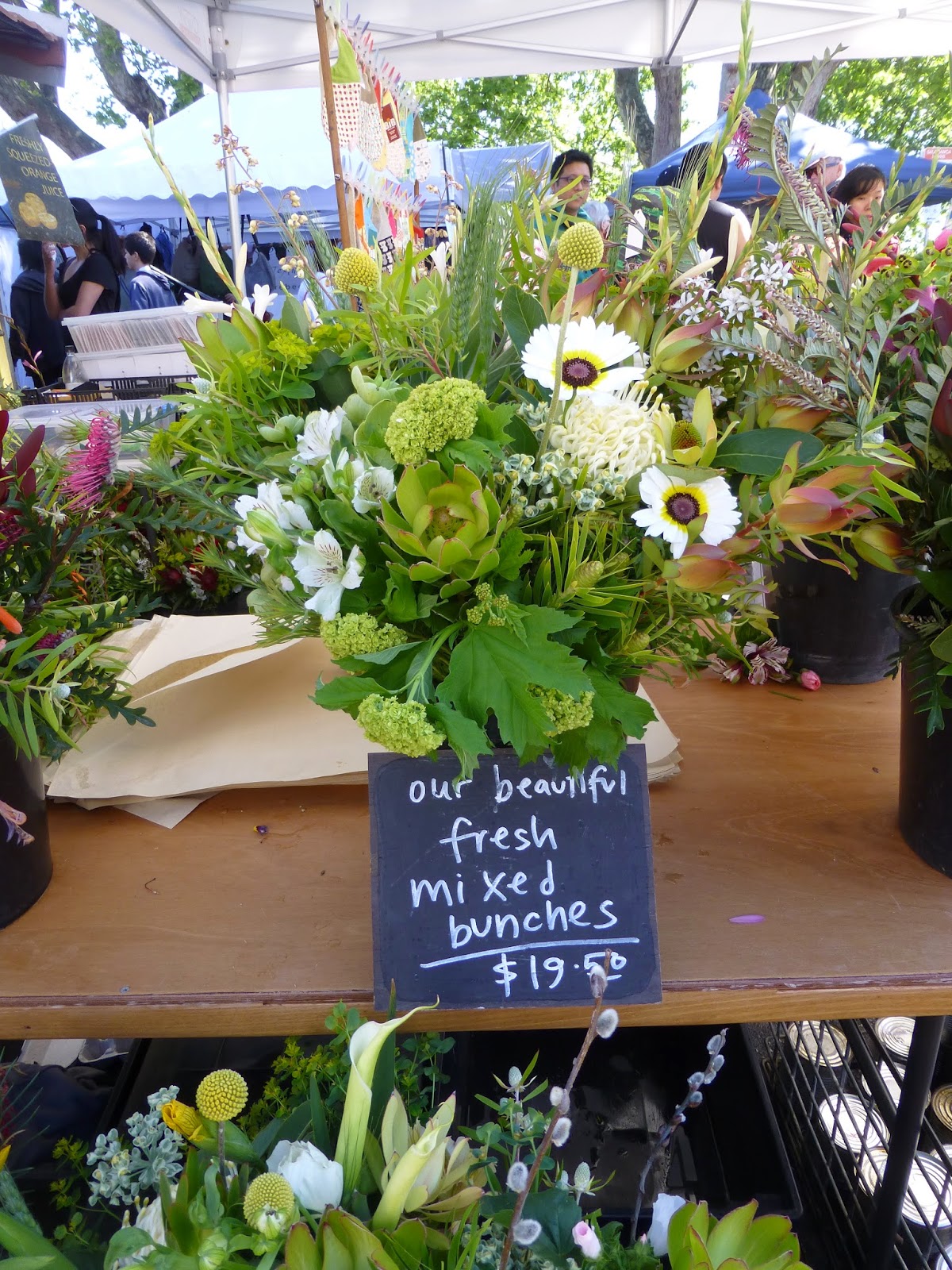 .......not failing to mention the wonderfully striking indigenous Warratahs which I have come to love. 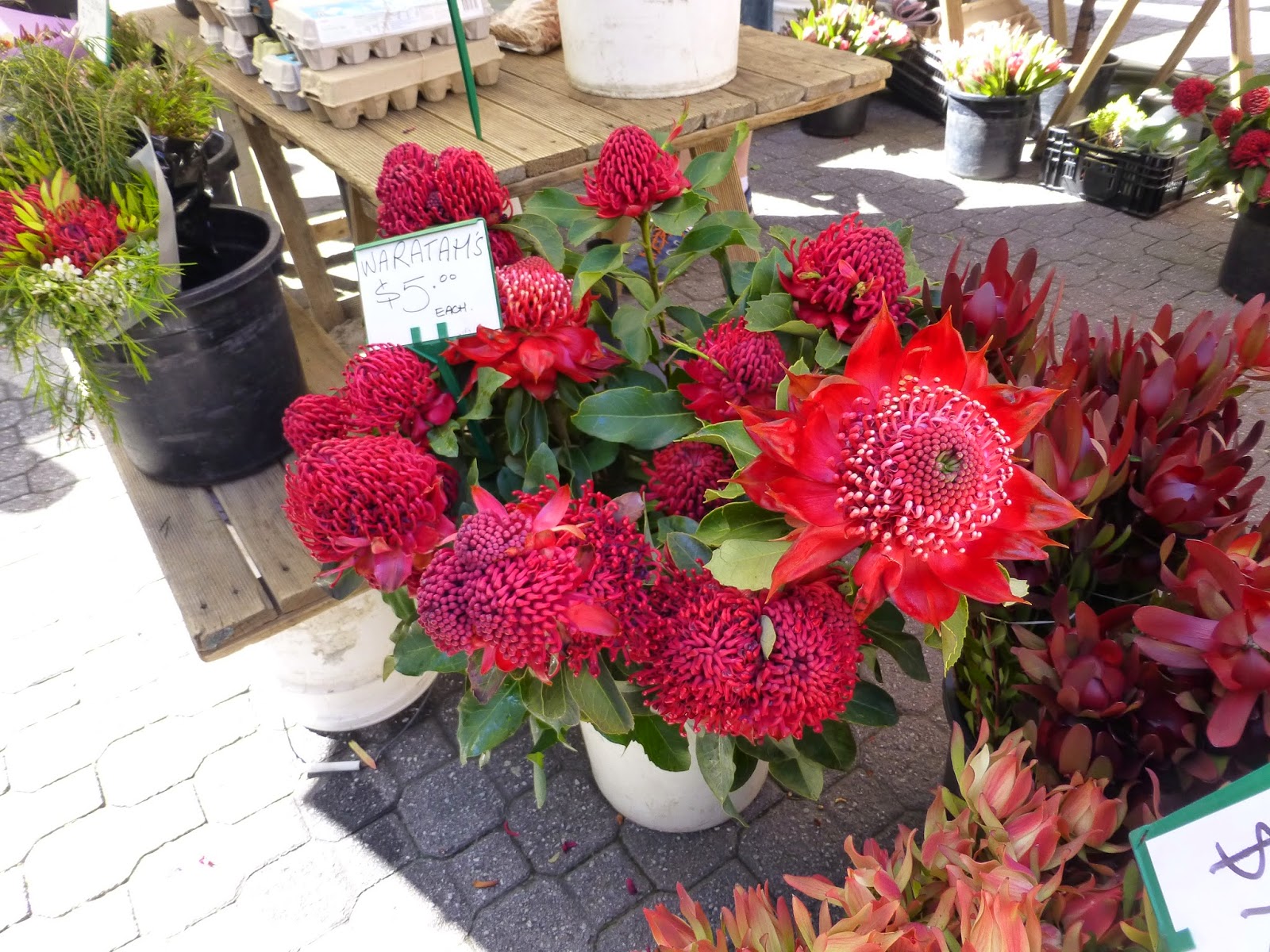 However, I wasn't too impressed with this stall and looking by the lack of customers I don't think I was the only one. Wallaby for breakfast? No thank you, in fact no to Wallaby full stop. 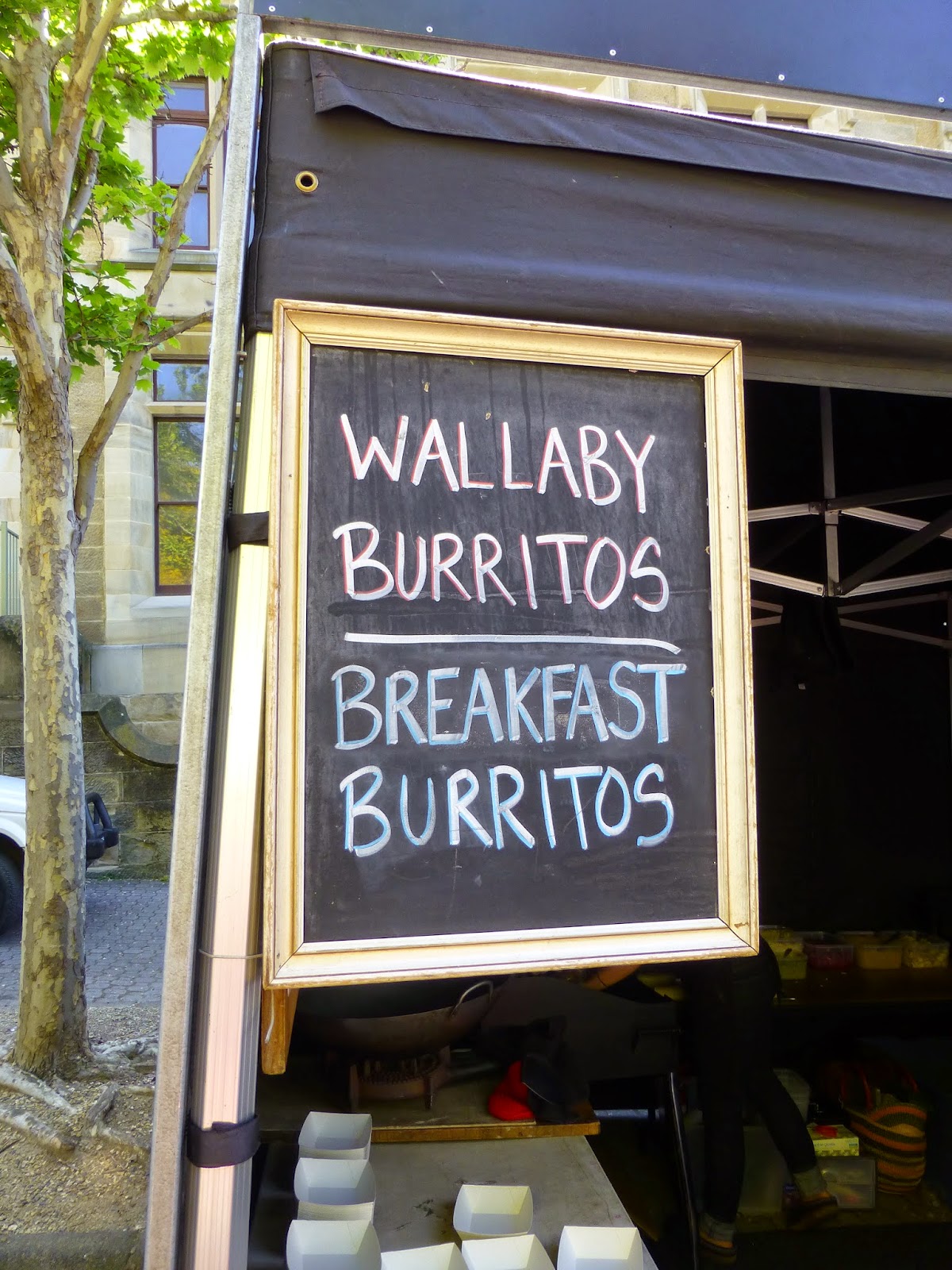 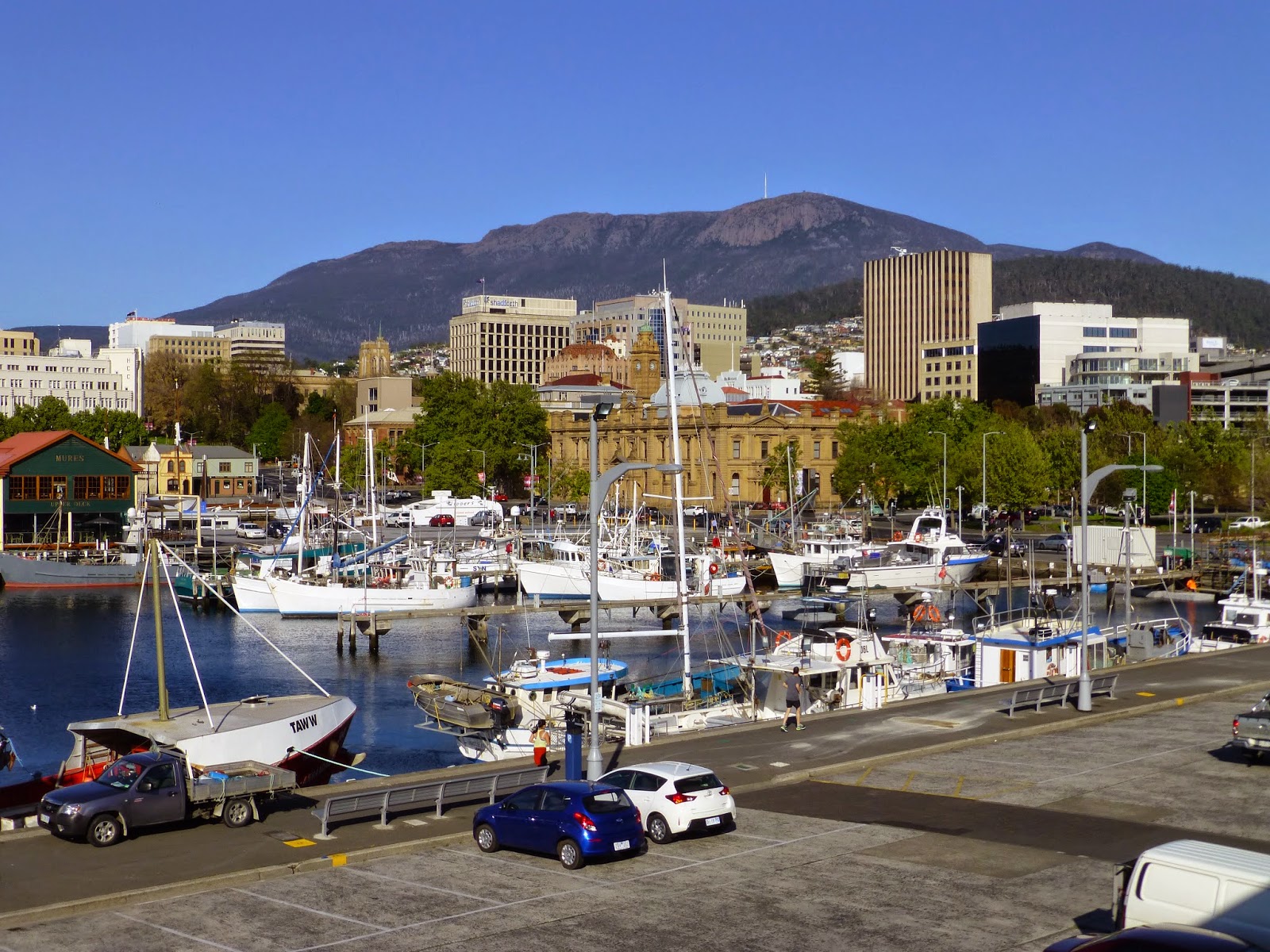 Our time in Hobart was all too short. We really did love the feel of the place and everyone was so friendly and genuinely interested in who we were and what we thought of Tasmania.

Well from North to South and everything in between we did have the most incredible time, so many diverse and wonderful experiences but before I close the chapter on our Tassie adventure there is just one more story to tell.

I am excited to tell the story, so many of my blogs evoke fabulous memories and spell out unique times for us. Without exception this next one will be up there as a very special experience during our time here in Australia.
Posted by Mrs T-J at 22:16