Little Sandy Creek was not planned

I have been very excited to tell this story and so pleased I've reached the point chronologically with my blog entries that I can. Its a bit of a long one but I hope you enjoy it, its very special to us.

The Henry Jones had an inner atrium which would have been the production floor for the jam making factory years ago.

It was flanked by little boutique shops, a deli cafe and two art galleries.

Whilst I had a potter around the "girlie" accessories on display, Hubster went into an art shop championing aboriginal works of art, Art Mob it was called.

Quite out of character, he came to find me.

"Hey come and take a look at this?"

I was a little puzzled as Hubster is not an art gallery kind of guy but clearly something had caught his eye. He waved me over to a very large piece on display and I stood in front of it, quite mesmerised.

It was really striking with a bold black and white colour-way and the beautiful dot-work was the best I'd ever seen.

Dot painting is a very specific characteristic of and method used in indigenous art. It is also extremely difficult to do and such a fine example, on such a large scale was really quite a sight to behold.

Euan the Art Director and owner of the gallery sauntered over to us.

"Isn't it an incredible piece?" he said

The three of us just gazed at it for a while, slowly nodding in agreement.

"I am so delighted to have this exhibition here" he continued "the official launch is at 6pm tonight and the artist Sam Juparulla Wickman will be with us, this is his signature piece, why don't you come along? Each painting has a story to tell and Sam is the man to tell it!" he said.

I copped a look at the price tag and even though it was pretty hefty, we both agreed it warranted it, given the months and months of work involved.

It was called Little Sandy Creek or Nunungoodu (given its indigenous name). 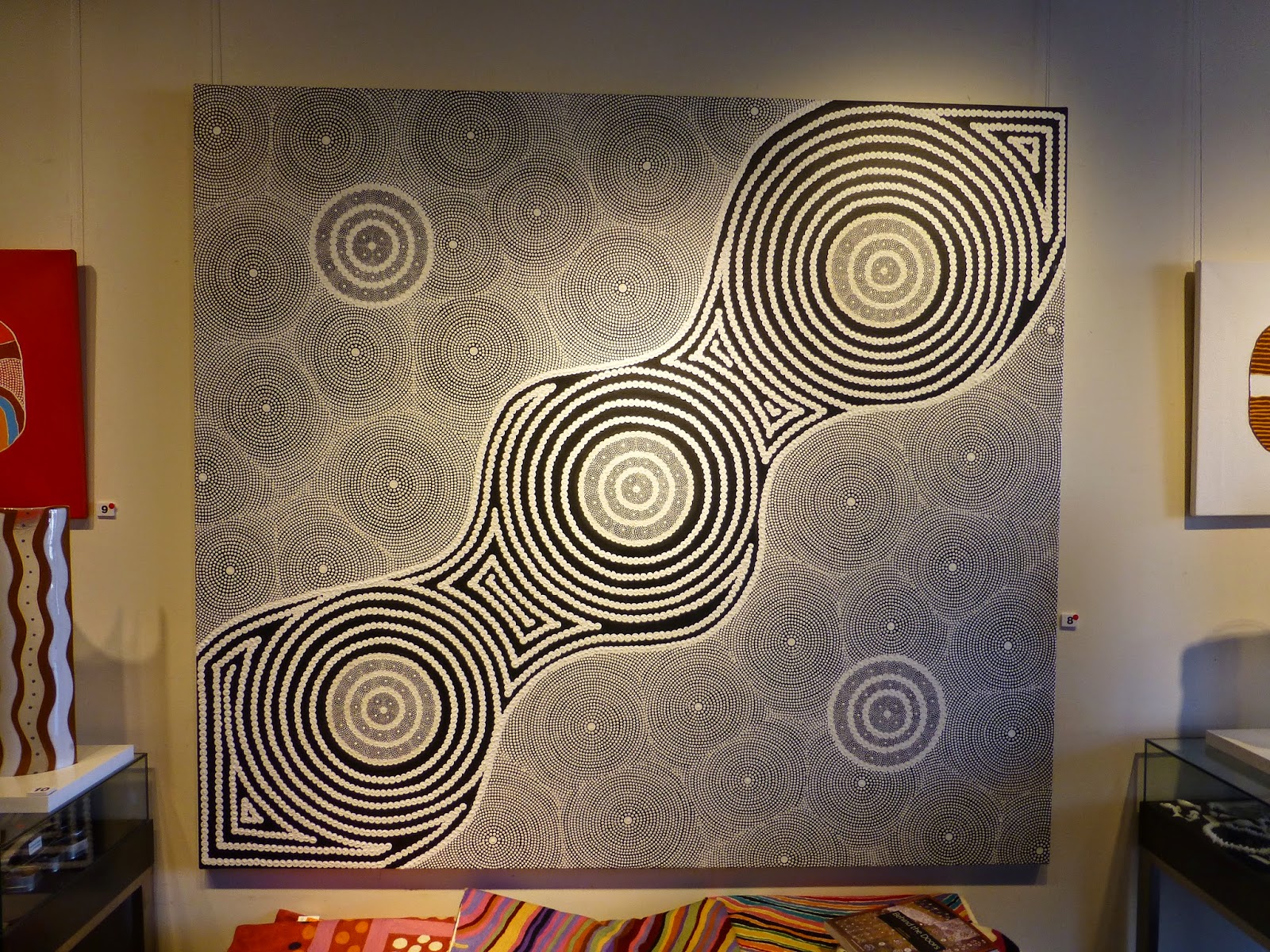 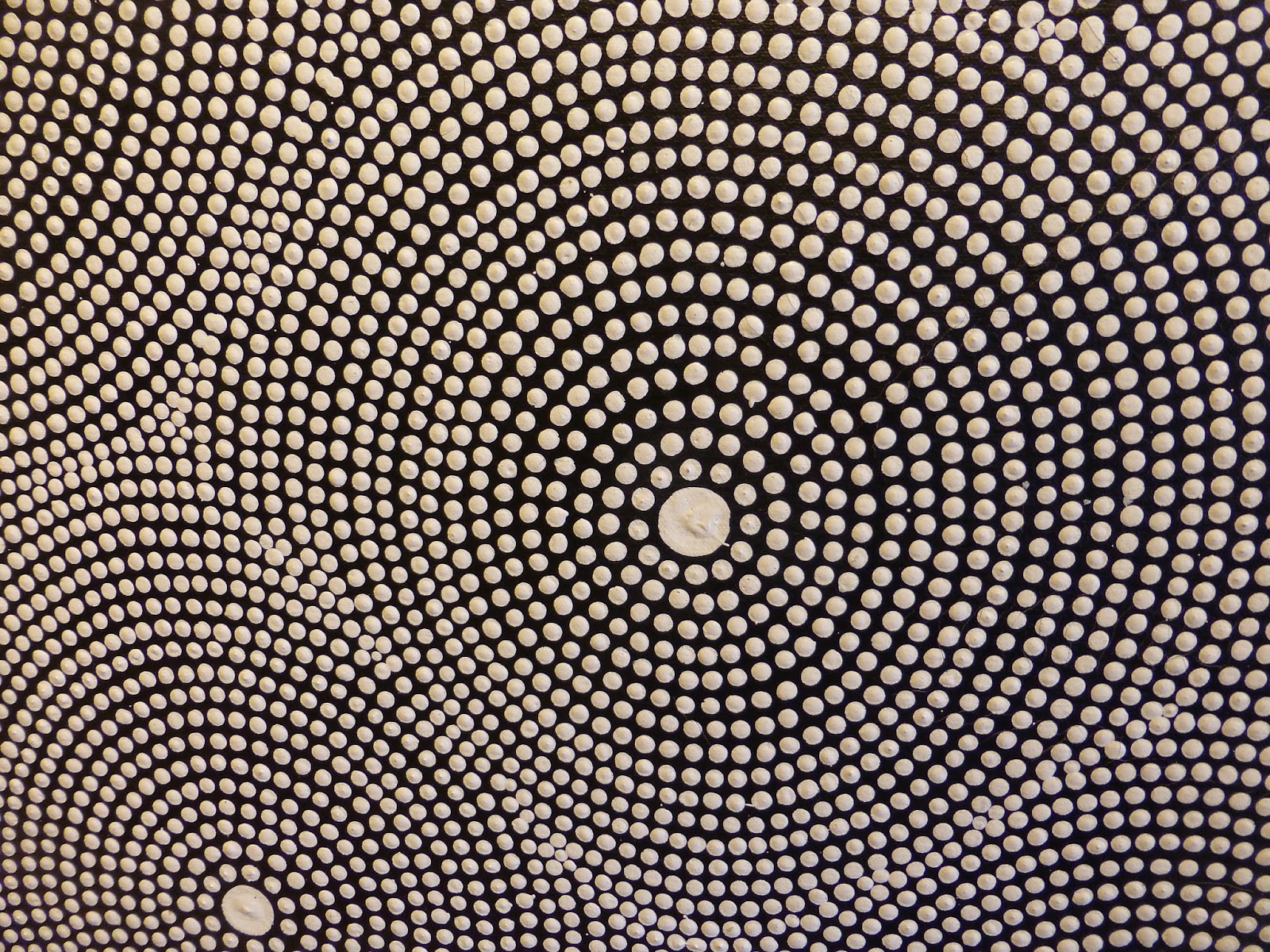 We went back to our room and had a good chat.  I couldn't believe how attached we both felt to this piece of art and that we were seriously considering buying it, this was completely left field for us. We had never done anything like this in our lives and yet it seemed to have gripped us both in equal measure, it just felt right.

Hubster got on the computer and shifted some funds around. Just in case.

We pitched up at 6pm and with a nice glass of Tassie red in hand, planted ourselves in front of "our" painting. We already felt it belonged to us.

Euan introduced us to Sam. We warmed to him immediately, he exuded kindness, fun, passion for his work and pride for his heritage. He was was very humble with soulful eyes that also bore a definite twinkle of mischief in them too! He spoke about Little Sandy Creek with the same affection that you would have for an old friend and that's exactly what this labour of love will always be to Sam.

What a character Sam is. 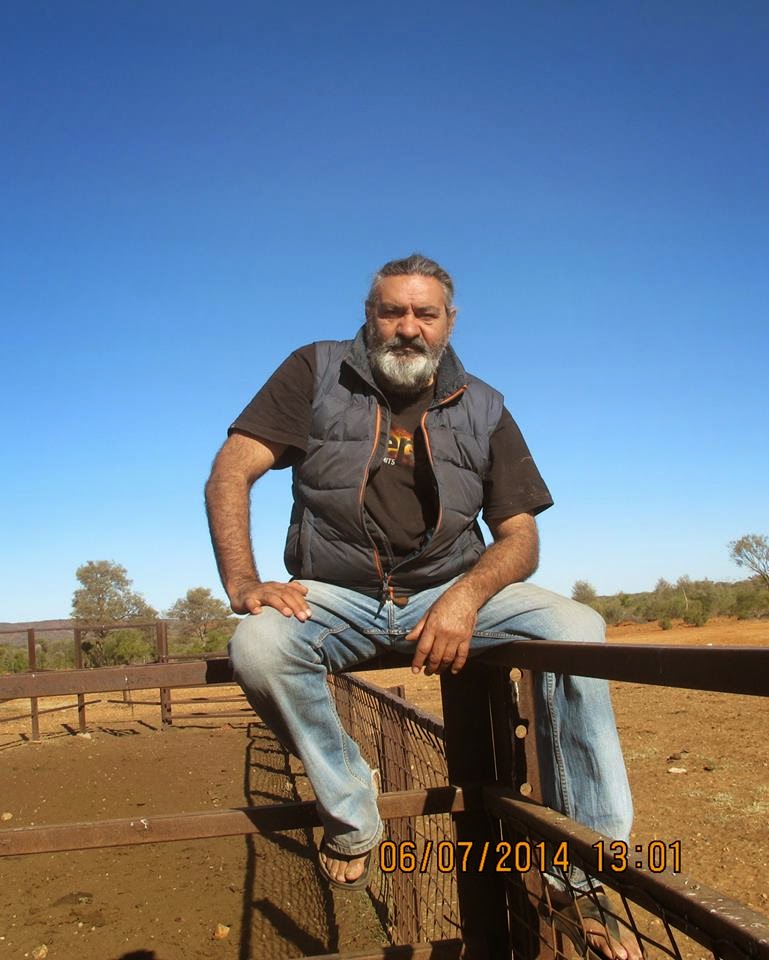 He is 62 years old and up until 11 years ago had never even picked up a paint brush. He is an archaeologist by profession and and a renowned and a highly sought after one too.

At the age of 9 he was drummed out of Alice Springs and away from his aboriginal heartland for being a bit of a delinquent. It would seem Sam was too much for his people to handle and he was sent to a boarding school in Sydney. Even today, Sam doesn't strike you as a conformist. Sam is Sam.

Here Sam was projected into a world so far removed from anything he had ever known and entrenched in this predominantly white, colonial life, with its alien culture and customs, it seemed over time that his own roots had became diluted.

Without needing too much elaboration we were left without any doubt that Sam went on to lead a very colourful and at times, wayward life.

However, at the age of 51 something quite extraordinary happened to Sam. His heart began to beat in a way it had never done before and it longed to dance to the tune of his aboriginal roots. Once buried deep, these roots resurfaced strong once more and Sam couldn't ignore the call.

Sam returned to his people and went through the Male Initiation that all Aboriginal boys go through. This is the passage from boyhood to manhood except Sam was 51 now and his contemporaries were wily, testosterone fuelled young men. What a thing to commit to!

The men are forbidden to ever discuss what actually happens during the months that they are out living in the wild together but the intimation was that this was no tea party! Instead, you concluded that this was a punishing and gruelling test that pushed each man to the limits of his physical and mental endurance. Sam says he still bears the physical scars.

From all of this however, something quite remarkable happened. Sam in a way was re-born and became reconnected to his Aboriginal soul, his life blood and his spirit and from absolutely nowhere, he began to paint. Without any formal training whatsoever, an incredible surge of creativity flowed from Sam, which could only have been borne from the imprint of thousands of years of his heritage.


We were quite in awe of his story.

He spoke eloquently and affectionately about all 6 exhibits but it was clear that Little Sandy Creek had a special place for him. However, through the process of it's creation I think he loved and utterly loathed it too at times!

All aboriginal art tells a story, often they depict a landscape with a significant meaning that is not at all obvious by just looking at it. The accompanying story is as big a part of the picture as the actual painting itself. Its important to find out what that is.

Little Sandy Creek is situated in the Red Centre of Australia, a very arid, unforgiving and harsh environment. It is a very valuable source of water to the people and it is highly revered. There are three main pools in the creek which Sam has depicted in the painting, what is remarkable about them is that they never appear to dry up completely and are a constant source of life giving water.

I think the importance of this creek is also depicted in the scale and size of the painting. Sam also mentioned that the smaller less prominent circles are nods to his time of male initiation but given his vow of silence, we can only wonder what this might be. To be honest I think its quite enchanting that only Sam and his circle of brothers, his Bunji (means brother), will ever know. Who knows, maybe over time if we listen with our hearts, Little Sandy Creek will reveal more to us.

So it was, we bought that painting but in reality it means so much more to us than just a painting. 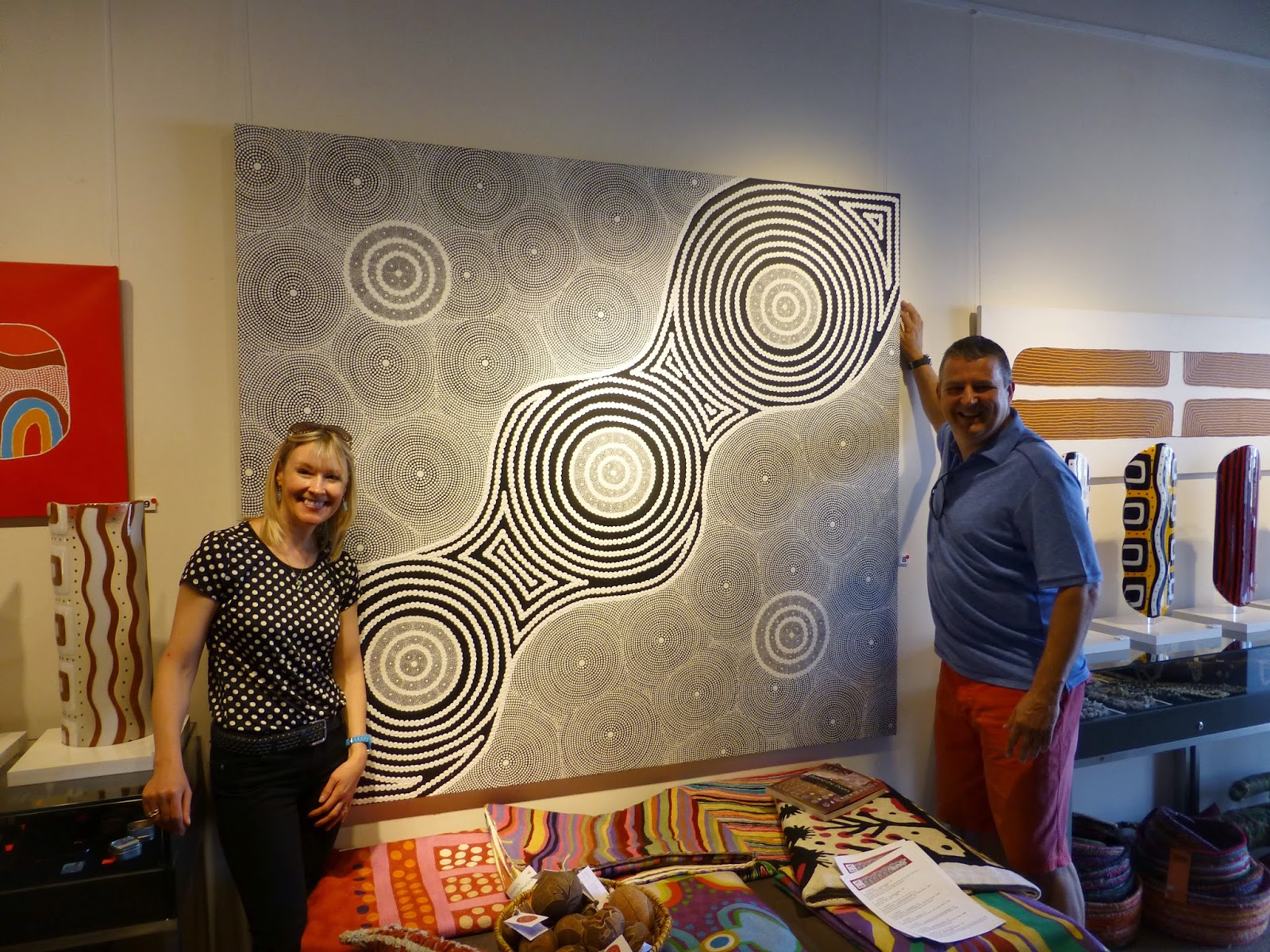 Little Sandy Creek has already taken its long trip over the ocean and now resides in safe keeping at the home of our dear friends back in the UK.

Sam told us that he and his family, especially his children, were so excited that it would eventually adorn the wall of our home so far away from where it was conceived. We cant wait to send them that photo.

It was such an honour to meet Sam and he will always be "Bunji" to us. 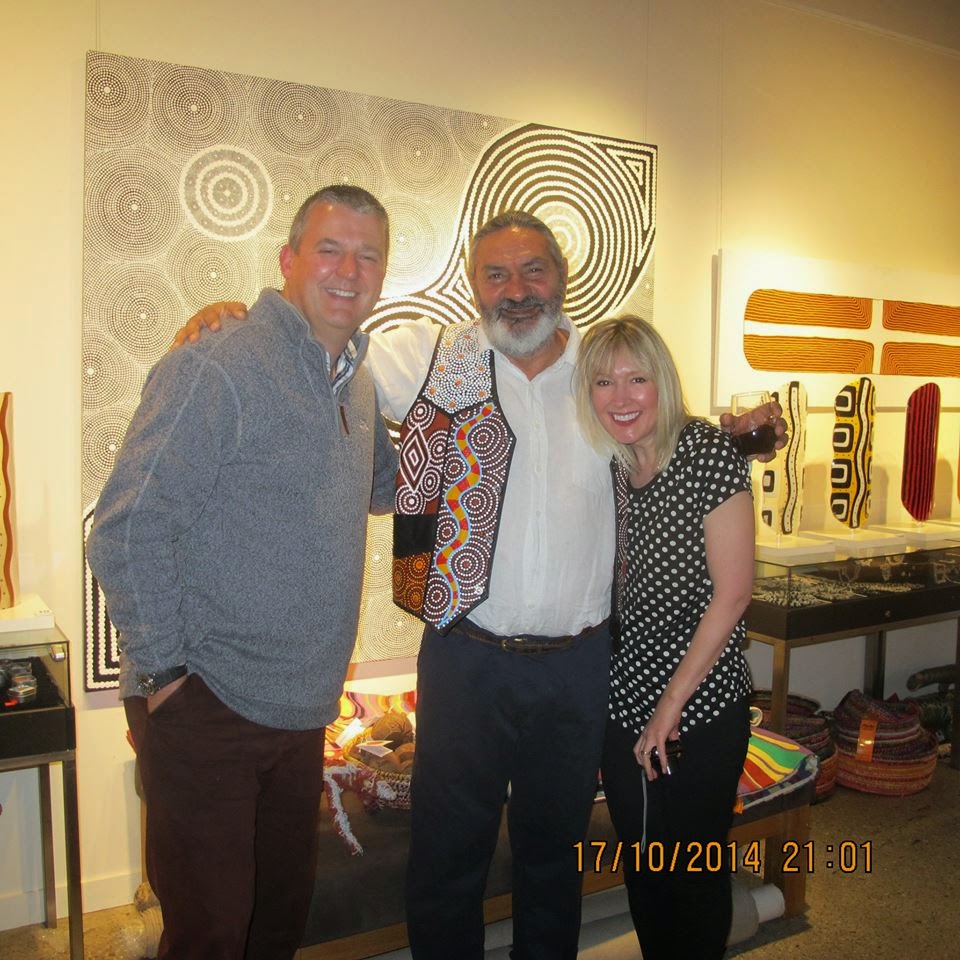 Sometimes some of the best experiences in life are just never planned.