Hotter than a snakes ass!

The camper van could sleep 3 people - technically. Two up top in the pop up roof tent and one squeezed down below next to the cupboards and whirring fridge.

Unless Hubster was going to shrink to 8 stone wringing wet overnight, there was no way we could sleep up top together.

However, even with himself up top and me below, hugging the fridge, it soon became apparent that sleeping in the van was becoming nigh on impossible.

It was damned hot, "hotter than a snakes ass in a rattle pit". We couldn't sleep with the doors or windows open for fear of hissing Sid looking for a night time cuddle.

The temperatures were creeping ever closer to 40 degrees in the day and only dropped a few degrees at night without a breath of wind. The bush fire rating was set to EXTREME! 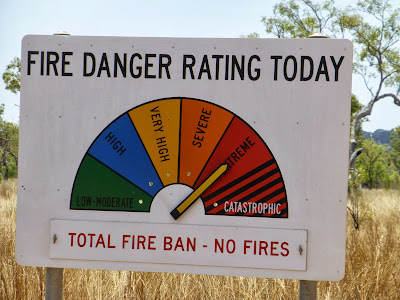 Our next stop after Cape Leveque was Derby. (pronounced Durby)

We promptly found a camp shop and purchased a pop up mesh tent. This is basically a mossie net attached to a tent frame.

However, it allowed us to be together, where we could stare at the stars through the mesh, capture what breeze there was and whistle na na na na na to all the bitey things outside. (However there was zero privacy as you can see!) 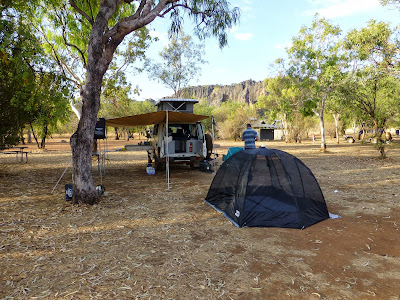 After a delicious sunset meal of Barramundi and salad on the Wharf, we had the best nights sleep so far in Derby. 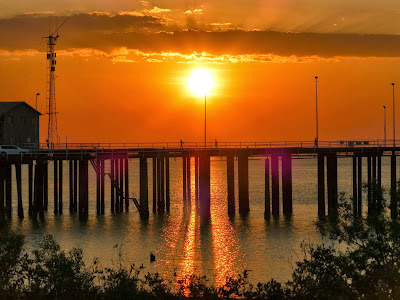 Earlier, on our arrival into Derby, we came across the famous Boab tree, deemed to be 1500 years old. It is 14 metres in circumference and was once used as a holding bay for Aboriginal slaves being moved to work on cattle stations in the North. I really don't like that thought but I am sure this tree has a tale or two to tell. The Boab trees of W.A are really a beautiful sight on the arid landscape. 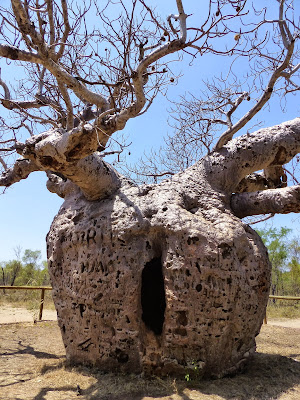 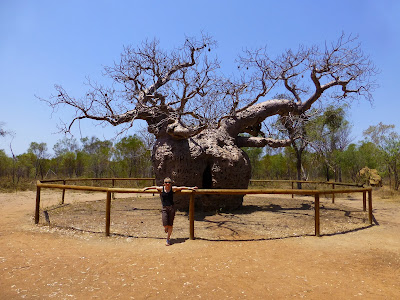 The following morning after a cuppa, fried egg and beans, we were at the airstrip in Derby at 7 am. Here we boarded a baked bean tin with a propeller and set to the skies with our pilot John who looked about 12! 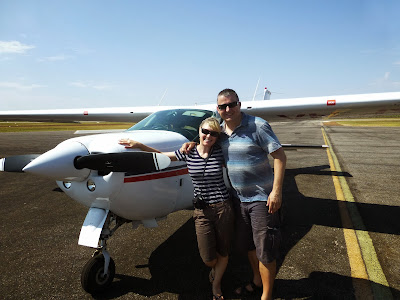 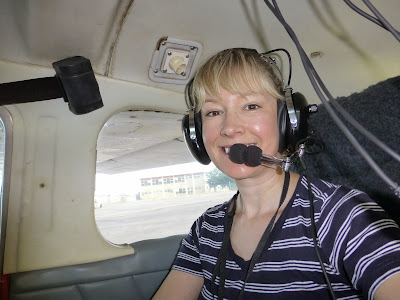 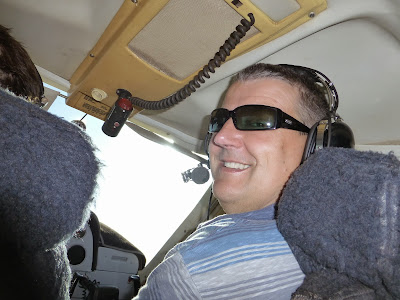 We soared across the Buccaneer Archipelago, Cockatoo Island and the Horizontal Falls. Here there was a massive cluster of over 1000 islands and some had been given over entirely to Iron Ore mining. Really not a bad spot to work I'd say. 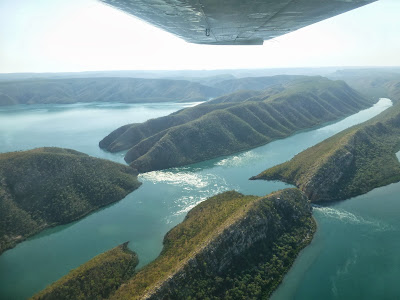 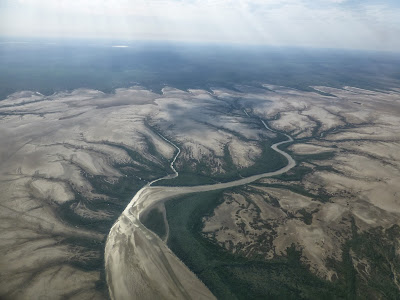 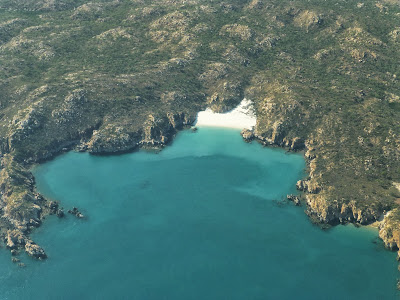 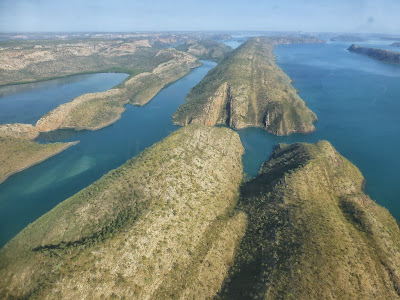 That same day we drove to Windjana Gorge, mostly in silence, both lost in our reveries from our scenic flight and looking forward to our encounter ahead with the largest concentration of fresh water crocodile in Australia. 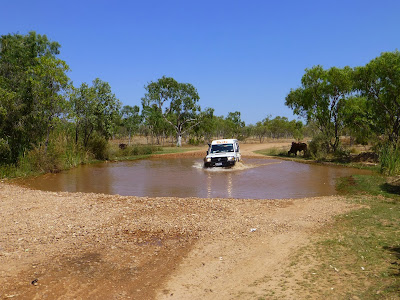 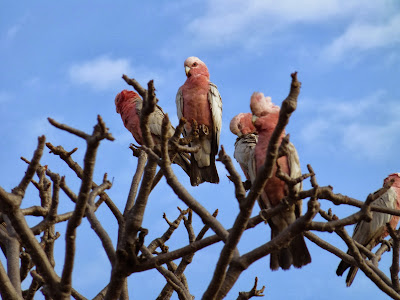 It was 43 in the shade by the time we reached the Gorge. The heat haze simmered above the ground like steam and so there was only one thing for it; get under the awning and doze with a cold one because even reading a book was too exhausting.


The next morning we were up with first light. By 5.15am we were booted up, armed with 4 litres of water and heading off into the gorge. Any later and the heat would have been too much. We had about a 2hr walk ahead of us. Almost immediately we spotted the "freshies" bathing in the warmth of the early sunlight, they were everywhere. We stopped counting at 120, it was quite a sight. Freshies are not deemed to be dangerous to humans unless of course you try and get up close and personal so it really was amazing to be within a metre or so of these prehistoric beauties.

The gorge was stunning and it was hard to believe that within weeks the arid river bed would become a huge torrenting river gushing through the valley. The wet season was imminent. 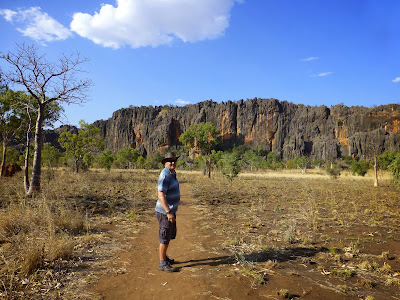 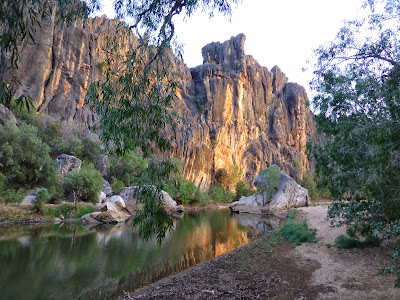 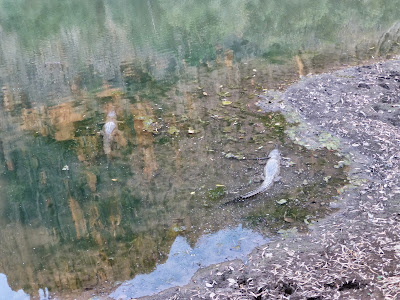 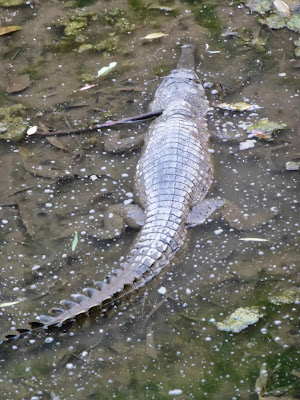 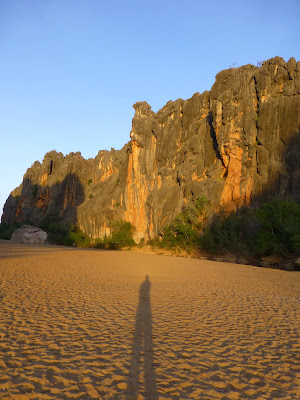 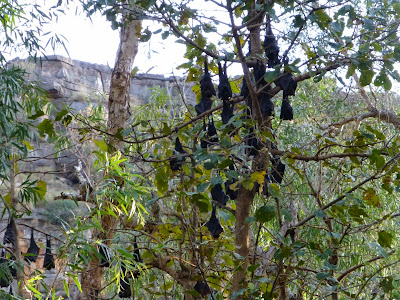 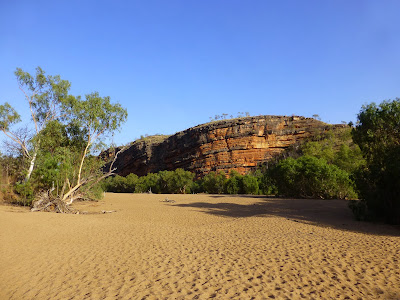 Windjana Gorge was never on our original itinerary, how mighty thankful we were that we diverted our course.

We had to hit the road once more, this time to find a small outback town to refuel the van and us. That next stop would be Fitzroy Crossing.