The afternoon of our arrival heralded an almighty tropical storm which on reflection gave us welcome respite from our travels.

I did however, look around our flimsy wooden and glass structure and as it rattled, I sure prayed it wouldn't roll. 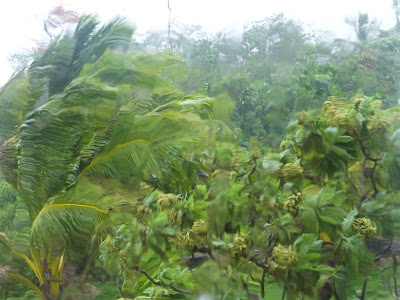 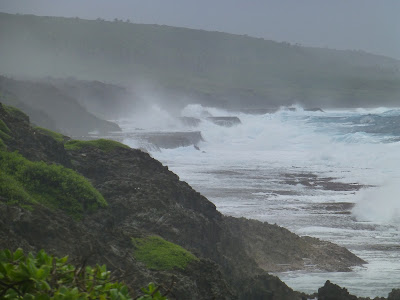 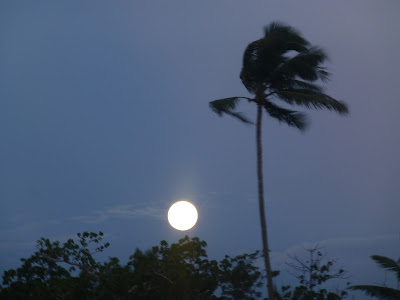 The storm was short lived and our exploration of this fascinating island truly began. The tide was high in the morning and low enough in the afternoon enabling us to take full snorkelling advantage. So after a leisurely breakfast on the whale deck, we took ourselves off along rainforest tracks towards the coast never knowing what we would find.

We tramped down coral paths, deep into the rainforest, wondering where the hell we would end up. It was eerily quiet. Niue is so remote that it has been impossible for birds to migrate and nest here, there are certainly no primates or rodents of any description. Lots of crabs though!

However, scurrying frantically away from our every footstep were hundreds of shiny skink lizards. Occasionally we'd hear a rustle and cracking of twigs where a coconut crab was foraging around for juicy coconuts to eat. More about these little beauties later. 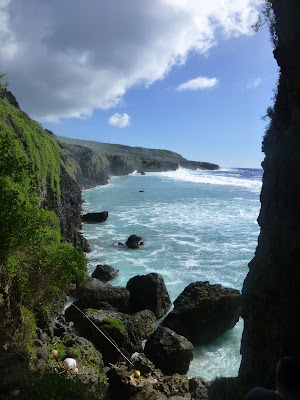 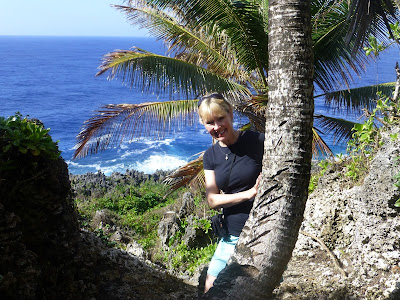 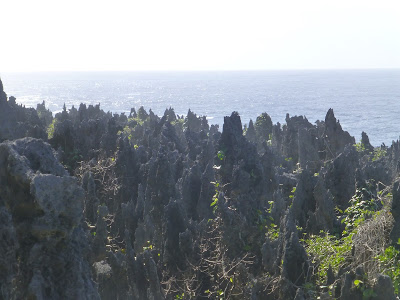 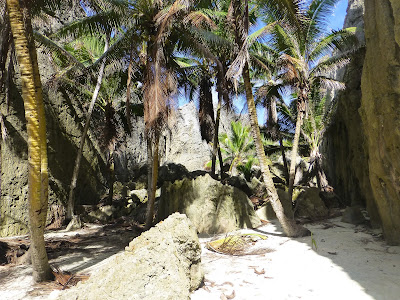 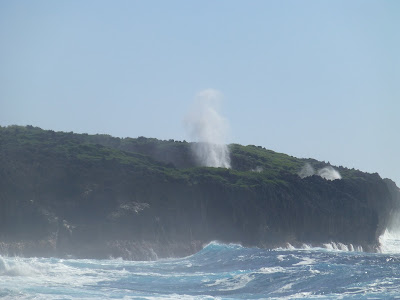 At the end of each walk it was always a wonderful surprise with the sight that greeted us. Our stock exclamation of "WOW!" became a source of amusement for us both as it seemed the only superlative that we could utter.

Every day a very different scene and another WOW!

We discovered the fisherman's ladders that took us down vertical cliff faces and the limestone caves that fell away to the ocean, needle like pinnacles of coral and honeycomb caves with plumes of seawater blowholes.

Every footstep was precarious and we certainly needed to concentrate. The razor sharp pinnacles of coral could rip our flesh to shreds in an instance and the slippery limestone caves could deposit us into the ocean faster than a waterslide in Orlando.

However, the total lack of "PC elf n safety" was so refreshing, like being a kid again. Nothing could prepare us for the raw beauty of this place, almost Garden of Eden-like, untouched, the land that time forgot. 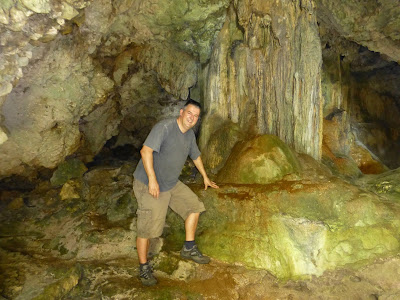 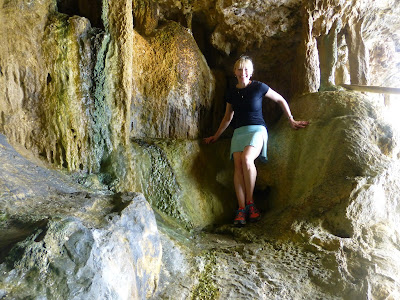 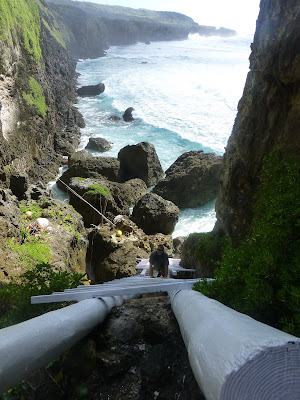 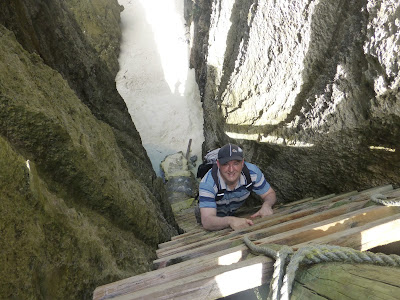 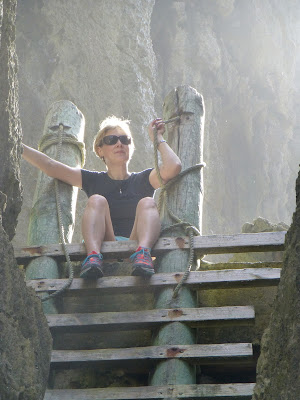 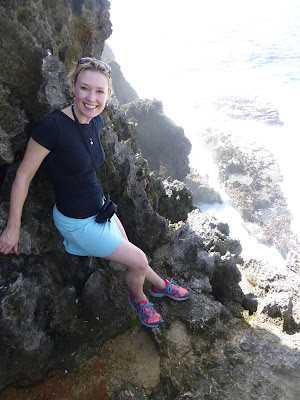 What we loved just as much about our morning walks is that we never saw another homo sapien.
Our island, ours! 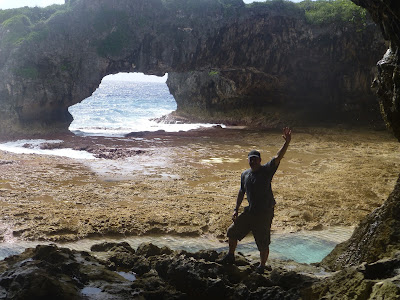 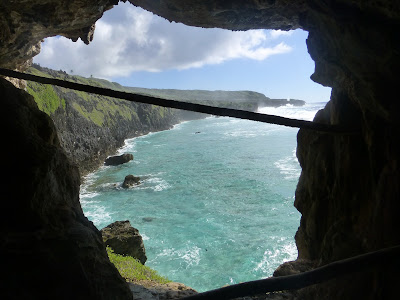 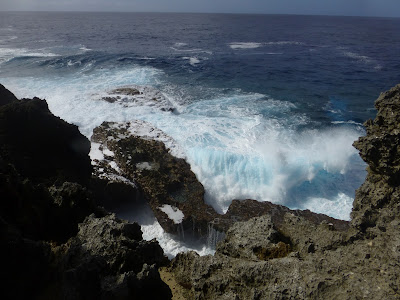 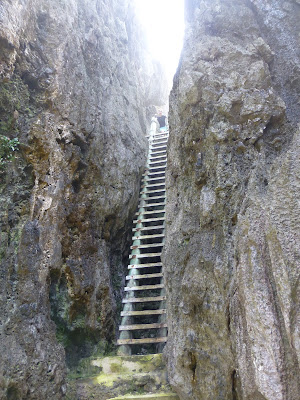 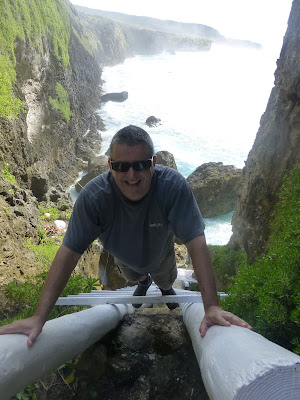 The Crabs!
I know this is a lengthy one, hope you are bearing up,  but I couldn't possibly leave this post about our "Niue" mornings without mentioning the crabs.
As I said very little lives in the forest but the crabs do and they are prolific, far outnumbering the 1,444 resident islanders.
These fellas are called the White Crab. (obvious), the islanders don't eat them though as they not tasty at all. (Yippee for the White Crab!) 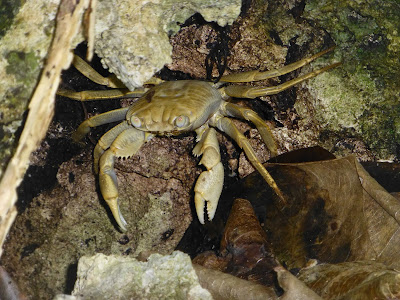 In comparison these fellas, the Soldier crab are delicious apparently and we were berated for not whipping him into our ruck sacks and having crab salad for dinner. They are feisty little things (hence their name and no attempt at handling from us). He was very beautiful. 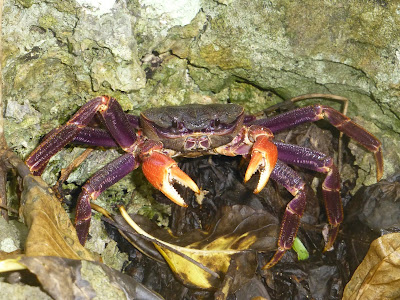 And finally but by no means least, the star of the show, the stunning Coconut Crab also known as Uga. The islanders are very proud of their Uga. The only road sign you will see on Niue is "SLOW DOWN - UGA CROSSING". It seems they protect them and consume them in equal measure. 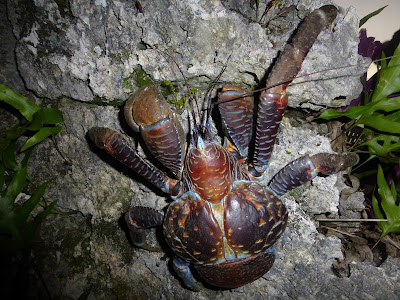 Simply Uga love to eat coconuts, they can live up to 100 years old and are probably the most prehistoric looking thing we have ever encountered. They live on the land but lay their eggs and hatch in the sea, their journey to the forest is a tough one, I wonder if they use the fishermen's ladder? 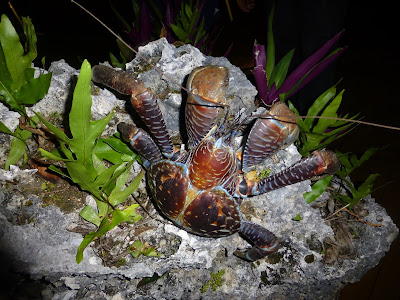 Now, if you have ever tried to crack open a fresh coconut then you will know that it is not a task for the light hearted or for weak biceps, generally a hammer is required. However, with those hefty claws, an Uga will pop one open like we would shell a peanut. Apparently they really do love our fingers too, which resemble coconut flesh already cracked and ready to eat, fast food for Ugas. In fact whilst we were there we saw a lady with a heavily bandaged forefinger, an injury sustained after an Uga had fought back as she tried to shove him into her freezer!
So I hope you will appreciate my bravery/stupidity and also understand my anxious expressions in the following photos. (taken at an "Understanding the Uga Presentation by a local lad who kept George as a pet, George was 40 years old and very heavy!)
Shhh! I loved every moment.
Psst! Hubster didn't hold him. 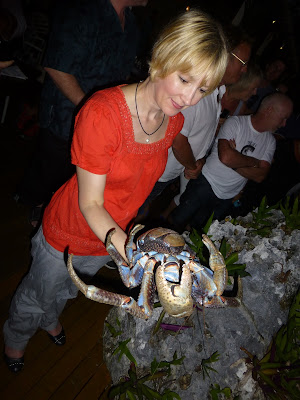 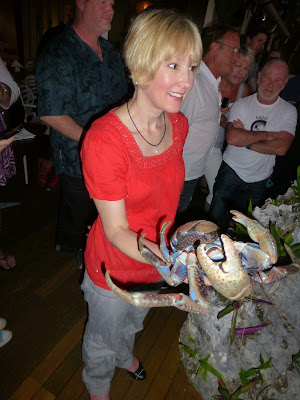 The Uga was a huge attraction for me. So blessed to see and hold such a beautiful and rare creature, known only to these lands.
Next instalment: our Niue Afternoons 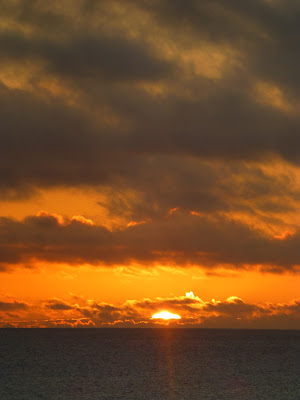