A multi-faceted gem of a place just an hour and a half drive from home.

It is only 26km long and 9km wide but it packs a lot in. In many respects it reminded me of our little county of Rutland back home, where the motto is "multum in parvo" - "much in little". It certainly could also apply here.

One of the main attractions but by no means the only one, is the Penguin Parade. The island is home to a healthy colony of Little Penguins, the smallest of the 17 varieties in the world and the only place in the world where you will see them like this.

We were not allowed to take any photos or video. I quite like that, 2000 flashing cameras would have been nothing but an invasion, so these pics are taken from archives.

Each evening, after a long day fishing, these little 13 inch birds emerge from the surf and waddle up the beach into the dunes, to their burrows. Some of them have to walk 1.5km to reach their homes. It must be exhausting.

Every break of the waves produces little pods of  pengiuns that come in together until all 1500 eventually arrive. They seem to just appear from nowhere but never alone.

We were there at the perfect time of year as every burrow was occupied by one or two fluffy baby penguins. They were all eagerly awaiting the return of their parents, some were very impatient and left the safety of the burrow to stage a lookout and boy do they make a racket!

It is amazing how every penguin recognises the call of their own and when they are reunited, the poor exhausted parents are mobbed and wrestled to the ground as the babies compete for their fare share of the day's catch.

There were over 2000 spectators that night and the little penguins could not have cared less. They waddled about around our feet focused only on their journey home.

Hubster and I were one of the last to leave, it was 10pm.

"Come on now, time to go" said the Ranger "Lets leave the night to the penguins"

The TV documentary I had seen and been enthralled by back home just last year had actually come to life.

We could hardly believe that we had just witnessed, first hand, one of nature's most rare and beautiful wildlife phenomena.

We left marvelling at these incredibly resilient little birds. They are so industrious that by daylight the next day, whilst we were still tucked up in our beds. they would have already made the journey back to the sea, just to do their parade all over again. 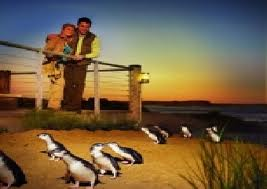 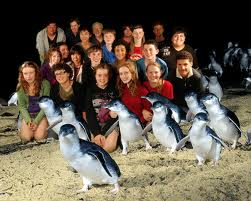 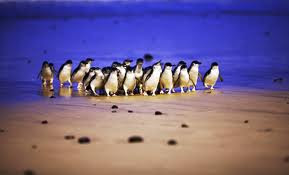 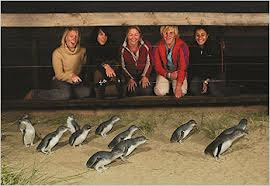 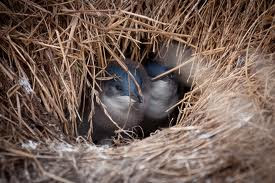