At about 10 am on the Saturday morning we departed the outback town of Exmouth. Pronounced "Ex-Mouth not Ex-Muth" as we Brits do.

Ex-Mouth is a quirky place always in perpetual motion with road trippers and backpackers pouring in for fuel and supplies. Tanned, grungy, dreadlocked affairs, with tats and piercings were clearing the supermarket shelves of pasta and tins of baked beans.

Me? I took 2 big bags of kettle chips into the outback, that would see me right. For snacking only, all sustenance would be provided for us at camp.

As we hit the road we both fell silent. He was scouring right and I was scouring left. Without word to one another, we were competing to see which one of us would spot the first, wild "roo". Hubster won and we were both proper chuffed.

He was a male Euro who obediently waited for the camera to do it's thing, before bounding enthusiastically into the bush.

My first wild Skippy, I was flushed with utter thrill-dom. 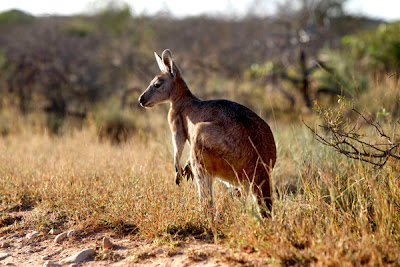 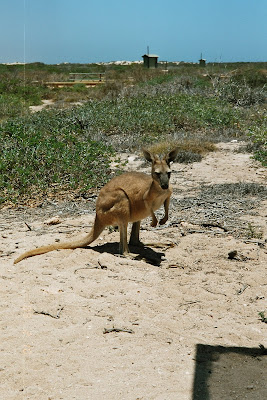 I wondered how and why so so many could be killed by vehicles on the road. There were certainly plenty of swerving tyre marks at regular intervals so I could only imagine that they bounced out of the bush at speed right into the vehicle's path.

Being me, I then began to worry it would happen to us. I pleaded far too much with Gareth to be ever vigilant which culminated in me receiving the legendary Hubster "deathstare". I shut up and crossed my fingers instead.

As the light began to fade all became clear. Those roos were popping up everywhere. I have since found out they are not the brightest of animals and will watch motionless as a vehicle approaches, then they are either dazzled by the headlights or just get spooked at the last minute and jump right into it's path. 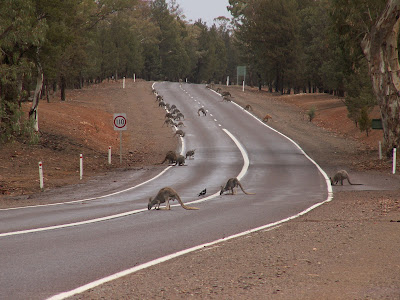 As it turned out, we happened to avoid a near collision on two occasions and I now appreciate just how easily it  happens.

Even so it was still very distressing.

Arrival at camp was a blessed relief. 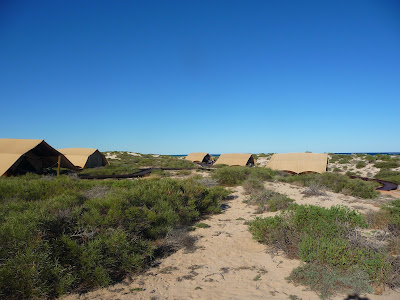 She then turned to me and said "Now, here's a girl that looks like she needs a cold glass of Chardy!"

The accent might have been different but she was talking my language alright.
Posted by Mrs T-J at 23:01