Not the mutant, Ninja kind

Apart from the superb snorkeling and diving off Lankayan Island, another reason for coming here was to see the fantastic turtle conservation work that's taking place here, for green and hawksbill turtles.

Once again you won't be surprised to hear they are endangered, ending up on the dining tables of many Chinese and Asian restaurants.

It has always been a dream of ours see a green turtle laying her eggs by the light of the moon. I still have the vivid image of the look of wonder on David Attenborough's face as he lay prone on the sand whispering gently to camera. We were very blessed and lucky and our wish was granted.

The turtles come up onto the beach at night so you had to be prepared to be roused from slumber to see them.

We had to hang a little tag on our door, giving permission for staff to wake us up in the middle of the night. 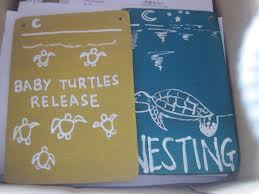 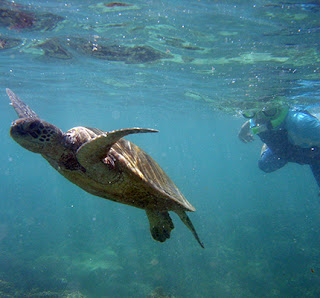 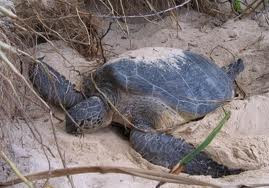 Our green turtle had no less than 82 eggs, about an average sized clutch. She used her flipper to dig a deep hole and began laying what looked like shiny ping pong balls. It took her nearly 2 hours. We sat transfixed and I honestly don't know where those 2 hours went. She was so focused and never even gave us a second glance.

By the end she was clearly exhausted and breathing quite heavily but her hard labours were far from finished. She then spent another hour using her flippers once more to bury her eggs. Every now and again she would stop and take a breather and every now and again a perfectly targeted flip of the sand would smack you square in the face!

I felt for her, felt her weariness, in awe of her. She would never see her babies born, she will never know if they made it to the sea or not.

Utterly spent, she heaves her exhausted frame towards the water and just as she gets to the water's edge she stops and looks out at the revitalising water for a while before gliding effortlessly into the night.

As soon as she is gone. The staff dig up the eggs (she will never know!) and take them to safety in the hatchery where they re-bury them deep into the sand.

It will take 55 days before the little babies start to peep their heads out of the sand where they will be released into sea.

We adopted that clutch of eggs. We can't wait to hear of their safe release. Not all 82 will hatch, 50 would be a good result. Everything crossed. 10th December we should know. 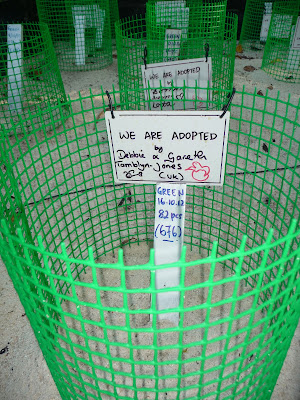 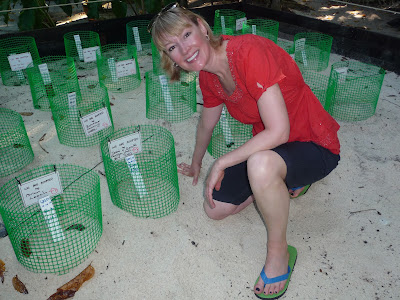 During our stay we were also lucky to see some baby turtles hatch and be released. It was incredibly moving to see the first little baby peek it's head through the sand and then a frenzy of scrabbling ensues as his brothers and sisters quickly follow.

Gareth was given the honour of carry the babies to the water's edge, a charge he took very seriously. 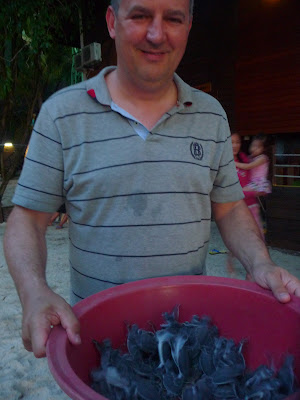 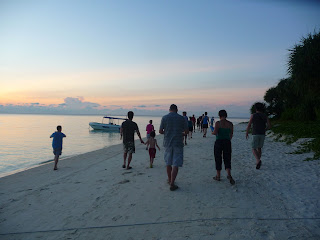 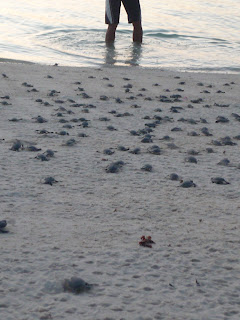 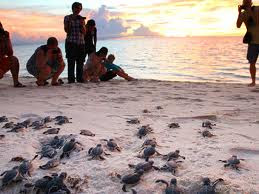 We all watch with joy as they scramble erratically towards the sea, how do they know exactly what to do? Just minutes ago they were buried in the sand!

It's a happy day.

The sobering thought however is this: 483 turtles laid their eggs on Lankayan island last year. Approximately 40,000 babies were released into the sea. Only 1 in a thousand will survive to adult hood, that's just 40 of them and half of them will be caught for the table.

Now you see what odds these beautiful and graceful creatures have to face to survive.

Lankayan's work is to be celebrated and most of all supported.
Posted by Mrs T-J at 01:02