Anatomy of a Hook Turn

Melbourne many not have a Harbour Bridge or an Opera House like Sydney but it has something quite unique, quite "special" and very, very confusing.

If you are in central Melbourne and you wish to turn right against the traffic, you do not get into the right hand lane. No, instead you get as near to the kerb as you can, that is as far away as possible from where you want to be! 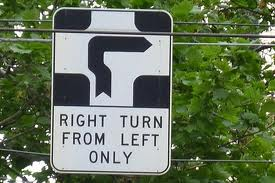 Not only is this disconcerting and counter intuitive, it would even test the Dalai Lama's patience.

Be prepared to sit there for an indeterminate amount of time, then in a state of complete flux, frantically make your right turn from there, just before the lights change.

It's all to do with keeping out of the way of Melbourne's trams which go directly down the middle of the road and turning cars would block their way. 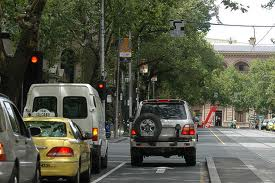 See the van in the above picture? Notice he is indicating to turn right? Yes you're head spinning now aren't you. Try doing them!

Not only is this immensely confusing for an ex-pat like me but it is to other Australians for sure and I suspect many Melburnians too!

Now the other thing is Aussie rules footy, what the heck?

No I cant go there yet, another blog another time and I would need a G&T in hand to write that one!